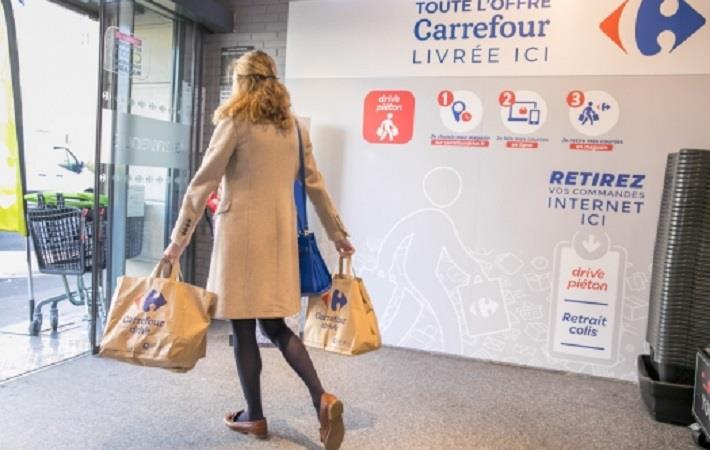 Pic: Carrefour
Carrefour Group has reported a growth of 3.1 per cent in its fourth quarter (Q4) FY19 at €21.74 billion. For the full year, there was also comparable growth of 3.1 per cent at €80.7 billion. The group reported reduction in FMCG sales by 0.9 per cent in France while hypermarket sales shrinked by 3.4 per cent due to the new legislation on food (EGA law).
The Group reflected the initiatives to regain competitiveness for hypermarket sales, including: investments in permanent prices, development of Carrefour-branded products, whose price is lower than that of national brands and reduction of under-productive non-food areas and the discontinuation of certain categories.
Momentum remained solid in the supermarket with 2.2 per cent growth. This was a good performance in a context of a reduction in promotional intensity during the "Market month" in November and the higher penetration of Carrefour-branded products. Moreover, Carrefour continued to post strong growth and outperform the market in organic products and food e-commerce.
Europe reported an improvement of 0.7 per cent. With constant focus on customers, food e-commerce, promotion of fresh organic products and operational execution, Spain also registered growth of 1.2 per cent.
However, in the competitive market Italy, the Group reported decline of 2.2 per cent. Since November, Carrefour Group had significantly invested in Belgium market, but it remained penalised by a declining FMCG market portraying reduction of growth by 1.1 per cent.
The eastern European countries like Poland (+4.7 per cent) and Romania (+3.6 per cent) escalated the growth. However, the Latin American nations Brazil (+7.6 per cent) and Argentina (+57.4 per cent) were the biggest positives for the Group.
The total sales in the Q4 at the Asian market, Taiwan improved by 5 per cent. Carrefour had sold its 80 per cent of stake in China last year.
The group has reaffirmed its ambitions and confirmed the financial targets of the Carrefour 2022 plan: a cost-reduction plan of € 2.6 billion on an annual basis by 2020, €4.2 billion in food e-commerce sales in 2022, €4.8 billion in sales of organic products in 2022 and objective of disposing of non-strategic real estate assets for €500 million by 2020 was achieved in October 2019.
Operational targets have also confirmed which include: reduction of 350,000 sq m of hypermarket sales area worldwide by 2022, 15 per cent reduction in assortments by 2020, Carrefour-branded products accounting for one-third of sales in 2022 and 2,700 convenience store openings by 2022.
The Carrefour Group is one of the world's leading retailers. In 50 years, the Carrefour Group has become a world leader in the retail sector. The second largest retailer in the world and the largest in Europe, the Group now features four major grocery retail formats: hypermarkets, supermarkets, cash & carry and convenience stores. The Carrefour Group currently has over 9,900 company-owned and franchise stores.

Carrefour Group has reported a growth of 3.1 per cent in its fourth quarter (Q4) FY19 at â¬21.74 billion. For the full year, there was also comparable growth of 3.1 per cent at â¬80.7 billion. The group reported reduction in FMCG sales by 0.9 per cent in France while hypermarket sales shrinked by 3.4 per cent due to the new legislation on food (EGA law).
More Carrefour News... More Retail News - France...