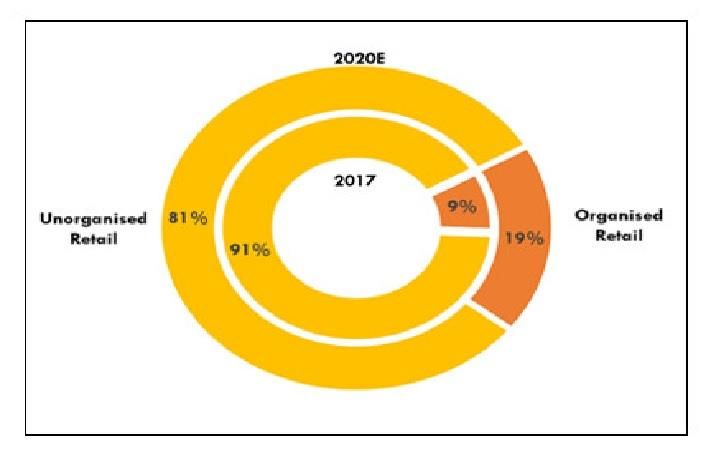 Retail break-up across top 7 Indian cities; Courtesy: Anarock Retail
From a mere 9 per cent share in 2017, the organised retail market in India is gearing up for a 20-25 per cent growth jump across the top 7 cities. By 2020, organised retail will have captured approximately 19 per cent of overall market share. The fact that it accounted for only 4 per cent just 10 years ago shows that Indian retail is coming of age.

Ahmedabad, Bhubaneshwar, Ranchi, Kochi, Lucknow, Surat and Amritsar, among others, are the new stages where the next chapters of the Indian organised retail saga will play out. Global retailers are now also eyeing cities like Chandigarh, Lucknow and Jaipur, to name a few, according to Anuj Kejriwal, MD & CEO, Anarock Retail.

“In these cities, customers’ shopping options were previously limited to whatever was available locally. Today, they are being aggressively wooed by hyper-capitalised e-commerce giants who sensed the latent opportunity in tier II and tier III long before brick-and-mortar retail did,” writes Kejriwal in an article.

For a long time, India was an unattractive destination for foreign retailers, largely because of regressive government policies. However, things changed when the government decided to give a major impetus to the retail industry. By liberalising its hitherto restrictive FDI policies, it repositioned Indian retail and finally put it on the global map. Consequently, global retailers and foreign investments made a beeline for the Indian retail industry.

As a result, the Indian retail sector attracted cumulative investments of more than ₹5,500 crore between 2015 - 2018, and close to ₹1,300 crore in 2018 alone. This made 2018 one of the best years ever for the Indian retail sector, and the momentum is eminently sustainable. Kejriwal adds, “The increasing involvement of foreign and private players in India’s retail infrastructure indicates long-term growth potential for organised retail in the country.”

The fact that despite this growth, 91 per cent of India’s retail market still remains unorganised underscores the huge latent potential that remains to be explored by organised players. Despite the deliriously positive numbers, organised retail in India is nowhere close to the level in more developed countries. For instance, in the US, 85 per cent of the overall retail market is organised.

The recent government clarification that from February 2019 the concept of ‘exclusivity’ will no longer hold good with respect to e-commerce firms, means that online retail players will scramble to grab a larger pie of the offline market, so physical stores will get the upper hand. (RKS)