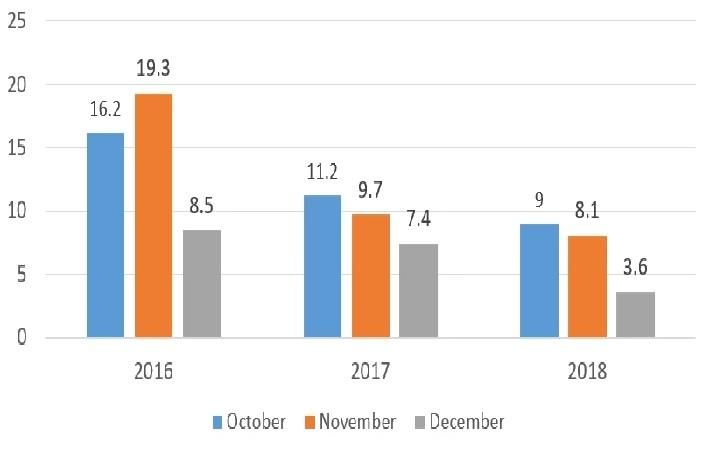 Figure shows Oct-Dec year-on-year performance since 2016. Courtesy: Capgemini
As the industry experienced a tough Christmas trading period, online retail sales growth in the UK decreased to an all-time low of just 3.6 per cent year-on-year in December 2018, according to the Capgemini IMRG eRetail Sales Index. For the entire year 2018, online retail sales were up 11.8 per cent. Online sales growth is forecast at 9 per cent for 2019.

“After online retail defied the downturn on the high street to record 16 per cent year-on-year growth in the first six months of the year, a series of lacklustre performances contributed to a lowly 8.4 per cent growth for the second half of 2018,” the index said.

Online retail sales across the whole of 2018 (+11.8 per cent), however, were higher than the 9 per cent forecast at the start of the year. It was because of the “impact of feel-good events like the Royal Wedding and FIFA World Cup, not to mention the glorious weather.”

However, the poor performance across H2 and December in particular, is evidence of low shopper confidence in the current climate. December’s growth rate of 3.6 per cent was by some distance the lowest seen across the whole of 2018, and continued a declining trend – falling below the final quarter (+6.8 per cent), second half (+8.4 per cent) and 12 month (+11.8 per cent) averages respectively.

“The first half of 2018 was actually very strong for online retailers – it resisted and arguably benefitted from the tough climate that impacted trade for store retail. It is only the second half of the year where the suppressed confidence and spend, evident in so many other sectors, has spread to online retail; the macro-economic situation must be exerting pressure here, particularly with Brexit now entering its crunch period in Q1 2019,” said Andy Mulcahy, strategy and insight director, IMRG.

“If there had not been so much uncertainty and shopper confidence had not been so negatively impacted toward the end of the year, it seems a reasonable bet that online retail sales growth could have been much stronger than 11.8 per cent for 2018. If Brexit can be resolved so that a course, whatever that may be, is agreed and pursued, it may help to build shopper confidence again with online likely to be the main beneficiary from a retail perspective.

“However, if 2019 proves to be a year of continuing uncertainty, with repeated delays and political instability causing market disruption, it may prove to be a tough year for many businesses to navigate – as we found out in late 2018, online is not immune from that,” Mulcahy added.

Bhavesh Unadkat, principal consultant in retail customer engagement, Capgemini, said: “There is a clear correlation between consumer confidence and consumer spending throughout the year. Conversion rates were actually high in December despite the poor performance, however the lower order value indicates that consumers were tightening the purse strings by taking advantage of promotions rather than purchasing more. This allowed discounters to take the share in the final month of the year. Retailers will need to think carefully on how to manage pricing strategies to protect share of the wallet in potentially quite uncertain times, and the evolution of the peak events will undoubtedly be a focus of next year.” (RKS)