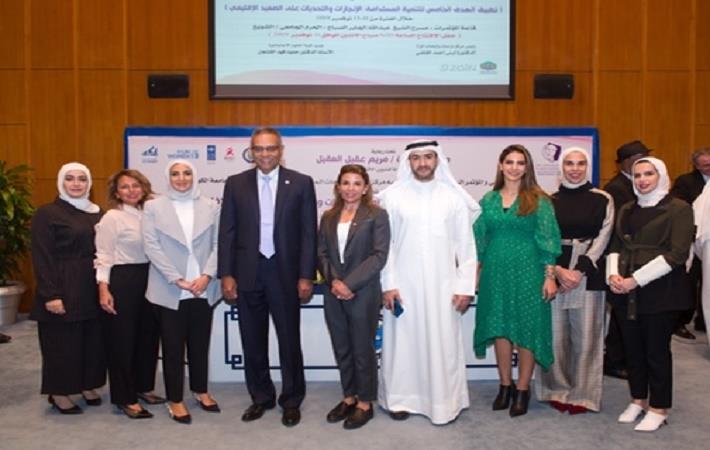 Pic: Equate
The Equate Group, a global producer of petrochemicals, presented its sustainability strategy and showcased its efforts to achieve gender equality during a conference on the ‘Sustainable Development Goals: Achievements and Challenges’ organised by the Women’s Research and Studies Center at Kuwait University and the United Nations Development Programme (UNDP).

“Throughout my 30 years of experience in multiple countries and despite the regional differences, I have realized that when it comes to women empowerment, teams face similar gender equality challenges. They are able to hire talented women but always lose them in their mid-career. Our biggest challenge is to make sure we don’t lose these women that we have invested in so much, because teams featuring gender equality are much more productive and successful,” said Equate president and CEO Dr. Ramesh Ramachandran.

“For us to succeed or to grow and to be more profitable, it is imperative that the teams and the staff in whichever functions we choose, rely on the presence of women, which enables companies like ours to be more successful and we see that in Equate here in Kuwait,” Ramachandran added.

The group leveraged the UN Women’s Empowerment Principles (UN WEP) as a benchmark for its policies and practices and developed a 3-year action plan in its duty stations in Kuwait, US and Canada. The plan included the launch of its global programme named ‘Elevate’ that aligns with the fifth SDG on gender equality and the New Kuwait Vision, and aims to strengthen and promote gender equality.

In a panel discussion during the conference, performance management rewards senior specialist at Equate and a member of the Elevate programme, Lulwah AlMunifi, presented the structure of the programme. For her part, the senior enterprise applications consultant at Equate and also a member of the Elevate programme, Zainab Haider, focused on the action plan to successfully implement the UN WEP.

Today, women account for only 22 per cent of the workforce in the global oil and gas sector, one of the smallest ratios among major industries. Equate’s goal is to increase the percentage of women working in this industry from 6-10 per cent within five years and empower them to partake in leadership positions.

The Equate Group, a global producer of petrochemicals, presented its sustainability strategy and showcased its efforts to achieve gender equality during a conference on the 'Sustainable Development Goals: Achievements and Challenges' organised by the Women's Research and Studies Center at Kuwait University and the United Nations Development Programme (UNDP).
More EQUATE Petrochemical Company KSCC News... More Textiles News - Kuwait...