Oerlikon nonwoven meltblown in demand across the globe 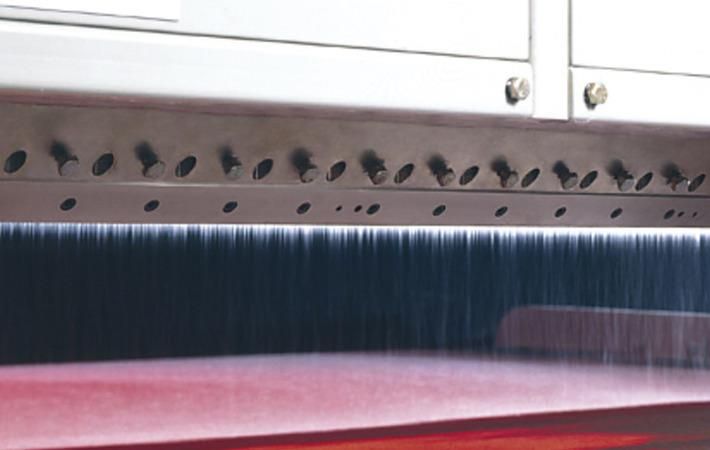 Pic: Oerlikon
Since the outbreak of Covid-19, demand for protective masks and apparel has resulted in high orders of millions of euros at Oerlikon Nonwoven business unit of the Swiss Oerlikon Group. At its German manufacturing site, high-tech meltblown systems with their patented ecuTE nonwovens electro-charging technology are meanwhile exported all over the world.
Also, the group has signed a contract with a business in Australia. Further, Schleswig-Holstein’s minister president Daniel Günther has agreed with the Oerlikon group over the technology of a ‘global player’.
“The machines and systems for manufacturing manmade fibre and nonwovens solutions from Neumünster enjoy an outstanding reputation throughout the world. It is especially in this crisis that the technology from Schleswig-Holstein has proven itself to be absolutely world-class,” Rainer Straub, head of Oerlikon Nonwoven, said in a press release.
In addition to a tour of the meltblown system and its assembly and production facilities, the visit by Günther had a purpose above all: the dialog between politicians and business. Straub and Matthias Pilz, head of Oerlikon Neumag, jointly expressed their thanks for the support that Oerlikon has repeatedly had the fortune to experience over the past months and years in Schleswig-Holstein and looked to the future full of hope.
“As a result of our additional investment at the site here in Neumünster be this in our new technology centre that will be completed by the end of this year or in our new logistics centre that is already operating, we, as one of the region’s largest employers, are continuing to move forward, supported by a state government that is also focusing on both promoting industry and business and on advancing an efficient training and educational system, as innovation is only possible with outstanding engineers,” Pilz, said.
“Treat education and training as a priority. Ultimately, they will secure the future of Schles-wig-Holstein as a centre of excellence and manufacturing,” Straub said in the release.
“The state government is supporting higher education institutions and students in the present coronavirus crisis. With a five-million-euro digitalisation programme, we are investing on the long-term digitalisation of our higher education institutions. With this, we are overall creating a future for young people, particularly also for those who could very well go on to invent the next generation of manmade fibre systems,” Günther said.
The Oerlikon Nonwoven meltblown technology with which nonwovens for protective masks can also be manufactured, among other things is recognised by the market as being the technically most efficient method for producing highly-separating filter media made from plastic fibres. The capacities for respiratory masks available in Europe to date are predominantly manufactured on Oerlikon Nonwoven systems.
“Ever more manufacturers in the most diverse countries are hoping to become independent of imports. Therefore, what we are experiencing in Germany is also happening in both industrialised and emerging countries throughout the world,” Straub said. In addition to China, Turkey, the United Kingdom, South Korea, Austria and numerous countries in both North and South America, Australia and not least Germany will for the first time also be among the countries to which Oerlikon Nonwoven will be delivering machines and equipment before the end of 2021.

Since the outbreak of Covid-19, demand for protective masks and apparel has resulted in high orders of millions of euros at Oerlikon Nonwoven business unit of the Swiss Oerlikon Group. At its German manufacturing site, high-tech meltblown systems with their patented ecuTE nonwovens electro-charging technology are meanwhile exported all over the world.
More Oerlikon Textile GmbH & Co News... More Textiles News - Germany...