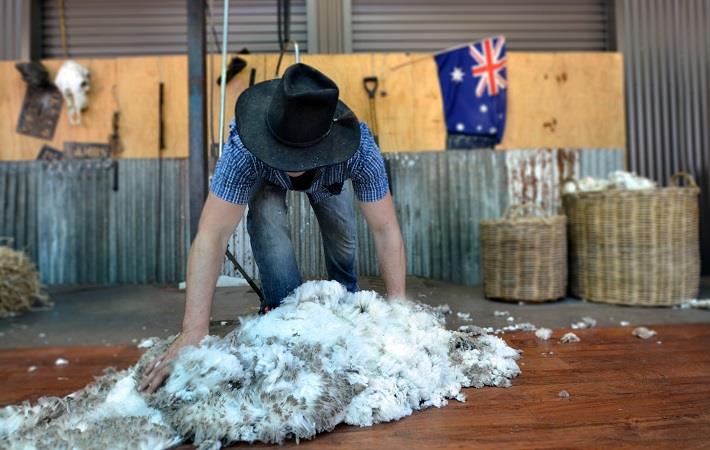 Pic: ChameleonsEye / Shutterstock.com
Prices at Australian wool auctions were negatively influenced this week by the decision to cancel sales last week due to a service provider unable to deliver the necessary data. Australian Wool Exchange (AWEX) reported the volume of 62,000 bales plus was the second largest weekly offering in over a decade, which was just too much for the market to cope with.
Sales were cancelled last week after an industry committee consisting of wool selling brokers and buyers/exporters determined the auctions could not be conducted under the normal working arrangement scenario, and postponement was deemed the only option.
During the sales week ending March 6, growers selling were disadvantaged by prices falling across almost the entire selection. "This was disappointing for the affected growers as many influential pundits were publicly expectant of a dearer market before the cancellation last week. The magnitude of the fall was tempered to a large degree by the massive passed in rate of 32 per cent on the final day of selling. This saw the weekly passed-in rate abnormally high at 23.7 per cent given the relatively minor fall in the Eastern Market Indicator (EMI)," Australian Wool Innovation (AWI) said in its commentary for week 36 of the current wool marketing season.
The AWEX EMI dropped 19ac or 1.2 per cent to close the week at 1561ac clean/kg. In USD terms the indicator slid just 2usc to 1034usc clean/kg as the 1 per cent appreciation of the AUD against the USD stymied the fall in that currency. Merino fleece reduced by 20 to 40ac in the Eastern centres but significantly larger falls occurred in the West. Notably in the WA market, the growers resisted taking the lower prices on offer and passed-in 40 per cent of the Merino fleece on offer. Skirtings dropped 50ac and cardings were 20ac lower. Crossbred wools managed to almost hold their values.
"A relatively good offering of superfine Merino spinners and best top making types were perhaps the only unscathed sector, but even these were trending easier to buy on the final day. As far as wool type goes, this week could not have seen a more differing quality on display. Merino spinners wools yielding over 80 per cent dry were shown side by side with other wool from drought regions which barely hit 40 per cent dry. These drought-affected types were all 50ac lower for the week," the commentary said.
The weeks’ buying was dominated by the large Chinese indents competing strongly against Chinese top-maker and locally based trading exporters. Similar competition was witnessed on the crossbred segment. Traders were dominant in purchasing the available skirtings and processors dominated the carding purchase lists.
The week saw Sydney and Fremantle clear their respective backlogs caused by last week's sales cancellation, but Melbourne will need the upcoming week to do so. There are 46,680 bales scheduled for sale next week.

Prices at Australian wool auctions were negatively influenced this week by the decision to cancel sales last week due to a service provider unable to deliver the necessary data. Australian Wool Exchange (AWEX) reported the volume of 62,000 bales plus was the second largest weekly offering in over a decade, which was just too much for the market to cope with.
More Australian Wool Innovation Limited News... More Textiles News - Australia...

Apparel manufacturers and exporters in India feel that they should...