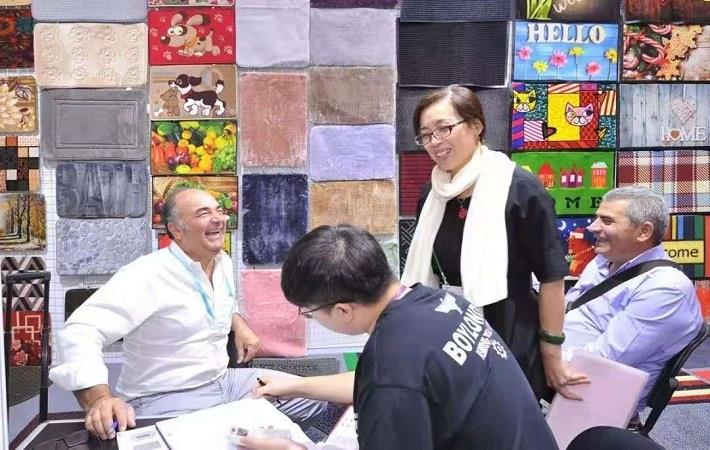 Artweaver is one of several companies that received export wins at the fair. The carpet company, whose product won the Canton Fair Design Award, has merged elements from the native American culture with its denim fabric in its new impressionism-style carpet. Artweaver generated a turnover of $1.5 million in the first two days at the Canton Fair.

Kent Zheng, general manager of Artweaver, noted that the company's efforts in design and branding helped win sales for more than 11 years at the Canton Fair. The company has also met customer demand by finding up to date market insights at the fair.

Another professional carpet supplier, Sunrise Carpet, has received potential turnover of over $2 million through their flame-retardant silk and cotton blended carpets.

Xique, a towel manufacturer that has seen sales growth at the Canton Fair over the last two years, brought its new CF Award-winning bamboo charcoal towel. The durable towel, made of bamboo charcoal fibre, can thoroughly clean pores and wash away dirt for a fresh experience.

"Canton Fair is a platform where returned buyers can no longer visit the factory but to pick up product samples on-site," said Yuanhui Lin, the company's manager. "This will help a lot for companies to establish business relationships and raise brand awareness with partners."

Lin also noted that the company has covered developed markets such as Japan, Russia, Thailand, Singapore and Canada, and is adding new categories to its product line too by introducing pillows to this year's Canton Fair.

"Textile is a pillar of China's trade with business partners. An incubator for small and medium-sized companies and an engine for market leaders, the Canton Fair has helped many textile companies have fruitful results at this edition, and we encourage our exhibitors to utilise our event to present new products and new technologies as well as to expand their market," said Alan Liu, deputy director-general of foreign affairs office at Canton Fair.

Canton Fair is held biannually in Guangzhou every spring and fall. Established in 1957, the fair is now a comprehensive exhibition with the longest history, highest level, largest scale and largest number of products as well as the broadest distribution of buyer origins and the highest business turnover in China.

Australia's department of foreign affairs and trade has confirmed...