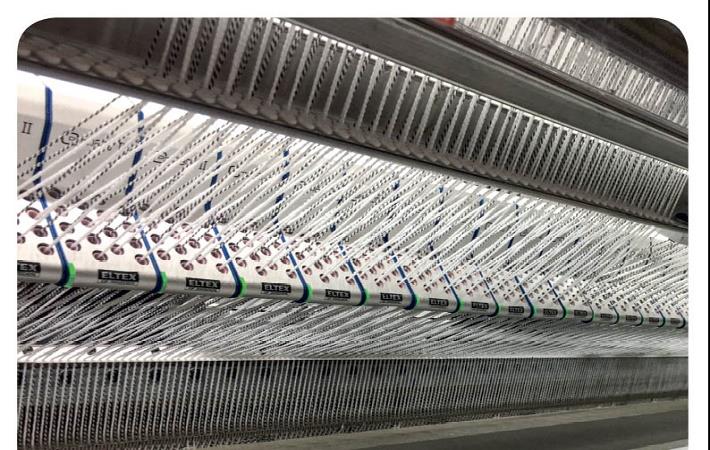 Pic: Eltex
Eltex has reported solid success with its Eye Compact II yarn monitoring system for carpet tufting machines since its launch at ITMA 2019. Unlike sensor systems that are employed at later positions on tufting machines in order to detect faults in formed fabric, Eye Compact II technology is about prevention at earlier stage through detection of missing yarns.

“We have a very healthy order book for this new monitoring system because it meets a real need for the carpet tufting industry,” said Brian Hicks, Eltex CEO. “We have already installed a number in the US and are currently fulfilling orders for companies in Australia, Canada, Thailand and the UK.”

The sensor units of the Eye Compact II, have been successfully miniaturised to approximately a third of the size of those with the established Compact system, allowing them to be mounted on the very latest high speed tufting machines that are graphics driven, with limited space at the puller rollers.

“There are a number of reasons why yarns can go missing, the most obvious being a bobbin simply running empty,” said Eltex sales and marketer Peter Wiberg. “They can also be broken as they’re fed through the creels or pulled out of position, so they are not successfully picked up by the needles.”

Critically, the sensors need to be installed after the last puller roller and before the tufting needles, because otherwise the roller could still be feeding yarns that will not been successfully taken by the needles. This is only possible with the extremely slim Eye Compact II units, which can also be positioned either above or below the rollers.

“Missing yarns can often go undetected by the operator, with anywhere up to eighteen hundred being fed at high speed into the tufting machine at one time,” said Wiberg. “Our system provides a 100 per cent guarantee that all of the yarns that should be in the tufted construction are being correctly fed into the primary backing. This both mitigates against expensive repairs at a later stage and also allows single operators to control multiple machines simultaneously.”

Another benefit is that the sensors can be arranged more closely together, with each of them monitoring 16 yarn positions, and their robustness ensures that once fitted, there is little the technicians or operators need to do.

The Eye Compact II system easily learns pattern changes and displays the number of yarns involved to the operator for confirmation, and different parameters for different yarns groups can also even be set if required.

“This new sensor technology operates at a critical stage in high-end carpet production, where everything comes together in the entire manufacturing process,” Hicks concluded. “The yarns and the carpet backing have already been produced and both are wasted if a fault is only identified later during the tufting stage, when it is also necessary to stop the machine. By eliminating both production waste and machine downtime, manufacturers can significantly boost both their profitability and sustainable footprint.

“All of these benefits along with the ability of a single operator to control multiple machines, mean that the new Eye Compact II provides a very quick return on investment.”

With its research and development work primarily carried out at its headquarters in Osby, Sweden, and North American sales and service operated from its subsidiary in South Carolina, the manufacturing plant of Eltex has been located at Templemore in Ireland since 1976, providing significant advantages in terms of high flexibility and logistical services to customers on both sides of the Atlantic. Eltex is a member of TMAS, the Swedish textile machinery association.

“The Eltex Eye Compact II perfectly illustrates how Sweden’s long tradition and history of textile production are being combined with a good climate for innovation,” said TMAS secretary general Therese Premler-Andersson. “The solid contribution to overall sustainable textile manufacturing that are being made by such incremental technology improvements around the world are often not fully recognised, but they are certainly appreciated by satisfied customers.”

Eltex has reported solid success with its Eye Compact II yarn monitoring system for carpet tufting machines since its launch at ITMA 2019. Unlike sensor systems that are employed at later positions on tufting machines in order to detect faults in formed fabric, Eye Compact II technology is about prevention at earlier stage through detection of missing yarns.
More Textiles News - Sweden...

The China Textile Machinery Association (CTMA) is a social-economic...