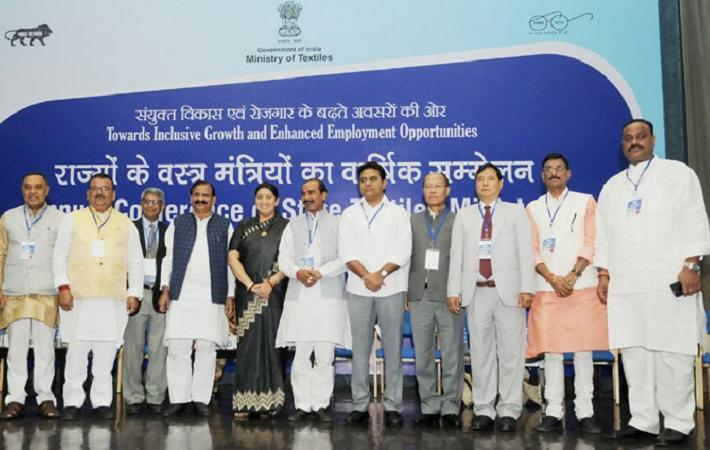 Union textiles minister Smriti Irani in a group photograph at the inauguration of the Annual Conference of the State Textiles Ministers in Delhi. Courtesy: PIB
Union textiles minister Smriti Irani has called for capacity enhancement in production of textile machinery in the country and asked state governments to provide their support for expanding manufacturing and employment generation capacities. She said that only this would address the challenges of industry such as cost of power and labour.

In her address at the concluding session of the one-day Annual Conference of State Textiles Ministers in New Delhi, Irani stressed on the importance of a well-coordinated cohesive governance approach for more effective programme implementation and sectoral outcomes. Noting that many states do not have dedicated textiles ministers, she expressed the need for more dialogue and convergence at intra-state, inter-state and Centre-state levels.

Accordingly, in line with the spirit of cooperative federalism, the minister has ensured that the views and contribution of all states would be reflected in the new textile policy, so that India becomes the textile destination of the world.

Speaking on the importance of branding in textile sector, Irani mentioned that India's positioning in international market depends upon branding of Indian textile products.Â She recalled how branding of handloom products by involving top designers and retail giants in the country, has led to a paradigm shift in the handloom sector. Irani also proposed branding of eri silk as 'peace silk from the land of the mahatma'.

Textiles secretary Rashmi Verma highlighted the challenges faced by the textile sector, especially in the export market, due to uneven tariff and non-tariff barriers and expressed the hope that GST will bring down input costs, give a boost to textile exports and bring in greater capital investment in the sector.Â

Minister of state for textiles Ajay TamtaÂ highlighted various measures taken by the Central government to boost the growth and remove bottlenecks and challenges facing the sector in his key note address at the conference.

Irani also noted that education of children is the primary concern of weavers and artisans and spoke of the memorandum of understanding between Indira Gandhi National Open University (IGNOU) andÂ National Institute of Open Schooling (NIOS)Â to provide free, anytime and anywhere education to children. She sought support of state governments for the success of the programme, specifically in identifying artisans and weavers who need such support.

The conference gave a platform to the states to exchange their views on various policies and programmes implemented by the Indian government and specific challenges faced by the state governments in their implementation. Ministers and senior officials of textile departments of 18 states participated in the conference. (KD)