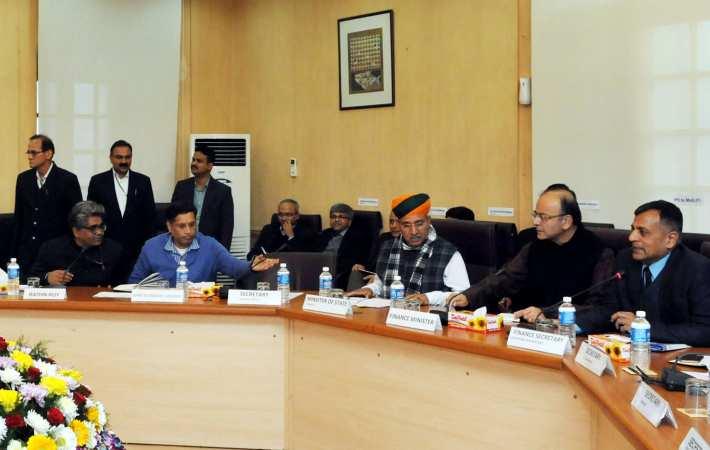 Finance minister Arun Jaitley chairing the Pre-Budget Consultative Meeting with the 'Economists' Group. Courtesy: PIB
Union finance minister Arun Jaitley and other senior officials from the ministry of finance received a number of suggestions from economists and other economic experts for consideration by the government for the forthcoming Union Budget 2017-18. At the Pre-Budget Consultative Meeting, Jaitley said India remains a bright point in the global economy.
In his opening remarks at the meeting in New Delhi, Jaitley said the growth in US is weaker than anticipated earlier and Brexit has led to disturbing reactions in the markets. On the other hand, the Indian economy has made significant improvements as growth in India remains stable, and “we are in comfortable fiscal and debt situation”.
He said that the present government has taken various decisive steps in last two and a half years which have helped the economy to get-out from inflationary spiral to stable prices. He said that to further boost the growth, the government has taken many steps such as passing of GST Bill, institutional reforms like UDAY, improved Ease of Doing Business, banking reforms and focus on infrastructure among others.
Some of the participating members suggested that this time Union Budget should not be a conventional Budget as these were not the normal times. Rather the government should make best use of the opportunity arising from demonetisation to present a Budget full of ‘out of box’ ideas. Members suggested that provisions should be made in the Budget to ensure that generation of black money is curbed.
Some members felt that even after demonetisation, there is a strong case for boosting capital expenditure as public infrastructure in India is too low.
Members expressed the need to widen the tax base but to reduce the tax slabs. Lower tax rates would increase compliance and reduce the generation of black money. Also many members expressed the disapproval of abolishing the Income Tax completely as this will create a huge gap between haves and have nots.
To push digitisation, it was suggested that a ceiling be fixed above which only digital mode/ cheque should be used and no cash transaction permitted above that limit. Also, the government can help by creating a single app for all banks and digital incentives under Section 80 C of Income Tax Act 1961 should be considered. At the same time, awareness about digitisation needs to be spread among masses. Keeping in view the low internet penetration in India, it was suggested that digitisation cannot be pushed beyond a point.
Noticing that last time, government tried EET (Exempt Exempt Tax), some members felt that it would be better to try TEE (Tax Exempt Exempt) this time. With this, problem of implementation will be solved. And then, the cap of Rs 1 lakh can also be increased to Rs 5 lakh. This will result in increase in savings. (RKS)