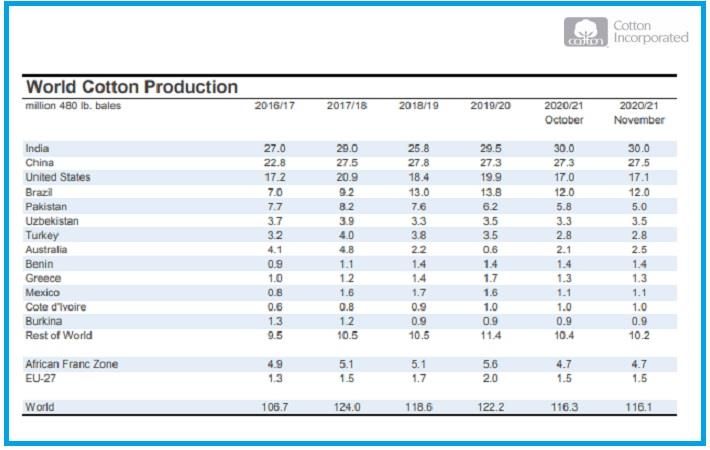 Pic: Cotton Incorporated
All international benchmark cotton prices increased over the past month, according to 'Cotton Market Fundamentals & Price Outlook' released this week by Cotton Incorporated. The NY December futures contract climbed from 67 to as high as 72 cents/lb near the end of October. Cotlook’s A Index rose from 73 to 76 cents/lb over the past month.
In international terms, the China Cotton Index (CC Index 3128B) increased from 88 to 100 cents/lb. In domestic terms, values rose from 12,900 to 14,500 RMB/ton. The RMB strengthened against the dollar, from 6.74 to 6.57 RMB/USD.
Indian cotton prices (Shankar-6 quality) increased from 66 to 69 cents/lb in international terms. In domestic terms, values increased from 37,900 to 40,200 INR/candy. The Indian rupee weakened against the USD from 73.2 to 74.2 INR/USD.
In international terms, Pakistani cotton prices increased from 69 to 74 cents/lb. In domestic terms, prices climbed from 9,400 to 9,700 PKR/maund. The Pakistani rupee strengthened against the dollar, from 164 to 159 PKR/USD.
The largest increase in prices over the past month was in China. A portion of the gains in Chinese prices has been attributed to speculative forces. However, speculators make trades for a reason, and a range of potential explanations have been offered. These include multiple concerns centred on the availability of high-quality fibre to Chinese mills. The weather in Xinjiang posed challenges to the domestic harvest. An unofficial ban on Australian fibre may limit access to quality cotton from that country. In addition, the US crop suffered a series of hurricanes that passed over a lot of acres with exposed bolls. This is expected to impact US fibre quality, but the extent of that damage will not be known until the cotton has been pulled from fields and run through classing.
Beyond quality-related concerns, the outlook for trade-related demand has also improved for a range of reasons, the report said. In the near-term, one of them is the impending closure of the window for shipments to China to be completed using 2020 quota allocations. Compounding the incentive to use quota is the current separation between Chinese and international prices, making imports a more profitable option.
There is also the Phase One deal. The USDA and the US Office of the Trade Representative released an update on agricultural trade in late October. The report indicated that in bale terms, the US cotton commitment to China is twice the volume from a year ago (3.6 million bales contracted for delivery in 2020-21, compared to 1.8 million bales were contracted for 2019-20 delivery one year ago).
Outside China, another contributor to import demand is the difficulty suffered by the Pakistani crop this season. The current forecast for the Pakistani harvest is 5.0 million bales. This is less than half the volume harvested as recently as 2014-15 and ranks as the smallest harvest since 1984-85. As a result, Pakistani imports are predicted to set a record in 2020-21 (4.3 million bales).
Collectively, the issues associated with production and international trade could be considered sources of support for prices. However, these factors have to be balanced against the context of global stocks. With COVID-19 and its effects on demand last crop year, the world made the second-largest addition to stocks on record. Even with the slight downward trend in global harvest estimates in recent months, projections for this crop year’s production still call for another surplus (+2.1 million bales). At the end of the 2020-21 season, warehoused supplies are forecast to be over 100 million bales and rank as the second-highest volume on record.

All international benchmark cotton prices increased over the past month, according to 'Cotton Market Fundamentals & Price Outlook' released this week by Cotton Incorporated. The NY December futures contract climbed from 67 to as high as 72 cents/lb near the end of October. Cotlook's A Index rose from 73 to 76 cents/lb over the past month.
More Cotton Inc News... More Textiles News - United States Of America...

Just as everyone thought that things are slowly moving back to...

Chinese factories to get uninterrupted power supply in winter: NDRC

Factories in China are likely to get an uninterrupted power supply...