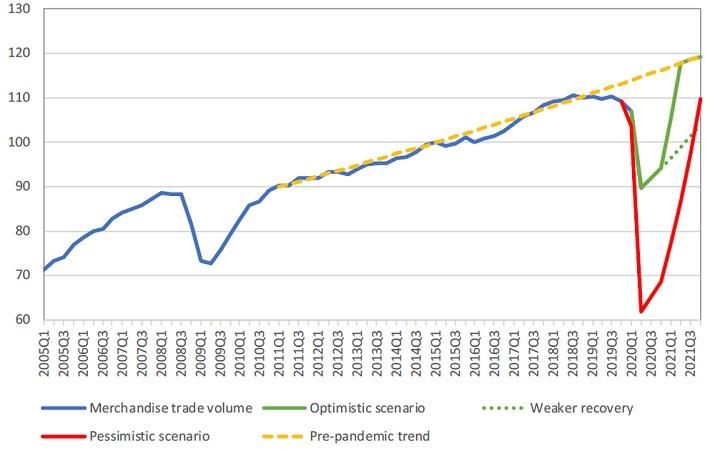 World merchandise trade volume, 2005Q1-2021Q4 (Index, 2015=100). Source: WTO/UNCTAD and WTO Secretariat estimates
World trade fell sharply in the first half of the year 2020, as the COVID-19 pandemic upended the global economy. However, rapid government responses helped temper the contraction, and WTO economists now believe that while trade volumes will register a steep decline in 2020, they are unlikely to reach the worst-case scenario projected in April.

"The fall in trade we are now seeing is historically large – in fact, it would be the steepest on record. But there is an important silver lining here: it could have been much worse,” said Director-General Roberto Azevêdo. "This is genuinely positive news but we cannot afford to be complacent. Policy decisions have been critical in softening the ongoing blow to output and trade, and they will continue to play an important role in determining the pace of economic recovery. For output and trade to rebound strongly in 2021, fiscal, monetary, and trade policies will all need to keep pulling in the same direction."

In light of available trade data for the second quarter, the April forecast’s pessimistic scenario, which assumed even greater health and economic costs than what had transpired, appears less likely, since it implied sharper declines in the first and second quarters.

The volume of merchandise trade shrank by 3 per cent year-on-year in the first quarter according to WTO statistics. Initial estimates for the second quarter, when the virus and associated lockdown measures affected a large share of the global population, indicate a year-on-year drop of around 18.5 per cent (See Chart above). "These declines are historically large, but could have been much worse," the Geneva-based organisation said in a press release.

The WTO's annual trade forecast of April 20, in light of the large degree of uncertainty around the pandemic’s severity and economic impact, set out two plausible paths: a relatively optimistic scenario in which the volume of world merchandise trade in 2020 would contract by 13 per cent, and a pessimistic scenario in which trade would fall by 32 per cent. "As things currently stand, trade would only need to grow by 2.5 per cent per quarter for the remainder of the year to meet the optimistic projection. However, looking ahead to 2021, adverse developments, including a second wave of COVID-19 outbreaks, weaker than expected economic growth, or widespread recourse to trade restrictions, could see trade expansion fall short of earlier projections," WTO said.

UK economy not hit as hard by COVID as expected: Chancellor Sunak

Painting a positive picture of the health of the UK economy as it...

Expressing concern over the uncertainty regarding the availability of ...

China Cotton Index to move down considerably by end of 2021

China Cotton Index (CCI) is expected to move down as Chinese monetary ...