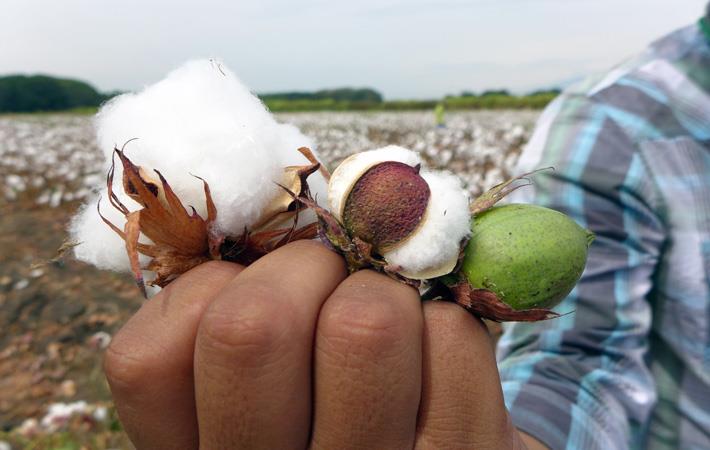 Pic: Shutterstock
After registering a fall of 9 per cent in cotton season (CS) 2018-19, India’s cotton production is likely to witness a double-digit growth of about 16 per cent in CS 2019-20, with production at 6.6 billion kg during the year on back of favourable monsoon and increased minimum support price (MSP) that led to increased cotton crop sowing, according to Care Ratings.

For CS20, the acreage under cotton is estimated to have marginally increased by about 1.3 per cent to 12.8 million hectares, the agency reported after a recent analysis.
After registering a fall of 9 per cent in cotton season (CS) 2018-19, India's cotton production is likely to witness a double-digit growth of about 16 per cent in CS 2019-20, with production at 6.6 billion kg during the year on back of favourable monsoon and increased minimum support price that led to increased cotton crop sowing, according to Care Ratings.#

Cotton prices (S-6 & J34) during the year remained largely stable witnessing an increase of about 2-4 per cent on back of increased MSP despite weak demand after remaining range bound during domestic CS18 at about ₹118 per kg on account of subdued demand from spinners.

Also, low and uneven rainfall along with loss of crop due to pink bollworm attacks in Maharashtra and Karnataka kept the supply in the domestic market tight during the year.

Domestic cotton consumption increased only marginally by about 1 per cent year on year (YoY), primarily by mills. In fiscal 2018-19, however, exports demand witnessed an improvement led by demand from Bangladesh, Vietnam, Pakistan and Sri Lanka. Exports to China remained strong as well.

As per International Cotton Advisory committee (ICAC), on back of falling stockpiles in China despite marginally higher production in CS20, cotton imports are expected to witness a marginal uptick from China during the year.

However, China’s cotton and cotton yarn imports from India are expected to remain under pressure as China has entered phase II of free trade agreement with Pakistan, which competes directly with Indian yarns and fibres.

Cotton yarn production is expected to remain largely stable at current levels and increase only marginally by about 1.5-2.5 per cent to reach 4,200-4,250 million kg in 2019-20, on back of increased availability of cotton at lower prices and higher demand from Bangladesh and Vietnam despite subdued domestic demand.

Also, 100 per cent blended and non-cotton yarn production is expected to witness a stable growth of only about 2-4 per cent to 1,710-1,740 million kgs on the back of expectations of YoY lower crude oil as well as substitute cotton prices in the domestic market.

Faruque Hassan
BGMEA
The global freight system will take time to get back its...
Kishina Daruka and Mishika Daruka
Ora
Partywear crafted out of natural fibres
Virginia Zingone
Italian Kids Brands
Everything is imported from Italy
Dhirubhai & Arvind Shah
Shahlon Silk Industries Ltd
Temporary pivot allowed Shahlon to make revenue
Yash P. Kotak
Bombay Hemp Company
One of the directors of Bombay Hemp Company, Yash P. Kotak, ...
George Stander
Label - Leocé
Leocé as a brand is classic and elegant and focuses on the...
Deepa Dosaja
Label - Deepa Dosaja
Sustainable fashion is at the core of all collections that...