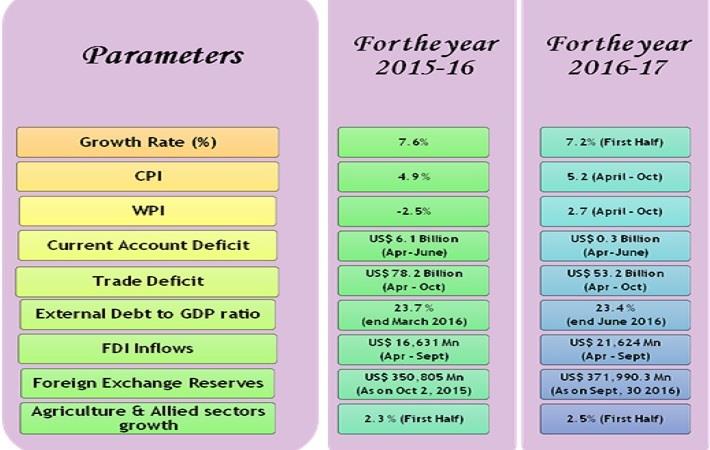 Courtesy: Ministry of Finance
Despite the continuing global sluggishness and recent pick-up in petroleum prices, India’s macro-economic indicators continue to remain robust. During the current financial year 2016-17, inflation has remained more or less stable, while fiscal deficit and current account deficit (CAD) as percentage of gross domestic product (GDP) have improved.
The growth rate of the economy during the first half of the current financial year is estimated at 7.2 per cent, which makes India one of the fastest growing major economies in the world. At the sectoral level, the growth rates for agriculture and allied sectors, industry and services sectors for the first half are estimated at 2.5 per cent, 5.6 per cent, and 9.2 per cent respectively. “The stress given to fiscal consolidation through expenditure rationalisation and revenue raising efforts and the focus on administrative measures for cooperative financial governance and also steps towards containing inflation have contributed significantly to macro-economic stability,” the department of economic affairs, ministry of finance, said in its Year End Review – 2016.
India’s merchandise exports (customs basis) declined by 15.5 per cent to $262.3 billion in 2015-16. In 2016-17 (April-October), growth of exports declined by 0.2 per cent ($154.9 billion vis-à-vis $155.2 billion in the corresponding period of previous year). Imports declined by 15 per cent to $381.0 billion in 2015-16. Imports for 2016-17 (April-October) were at $208.1 billion which is lower by 10.9 per cent as compared to $233.4 billion in the corresponding period of previous year. During 2016-17 (April-October), trade deficit decreased to $53.2 billion as against $78.2 billion in the corresponding period of previous year. There has been significant market diversification in India’s trade from Europe and America to Asia and Africa in recent years –a process that has helped in coping up with the sluggish global demand.
Meanwhile, inflation measured in terms of Consumer Price Index and Wholesale Price Index remained in comfort zone during the current financial year. The government has taken a number of measures to control inflation especially food inflation. The steps taken, inter alia, include, (i) increased allocation of Rs 900 crore for Price Stabilization Fund in the budget 2016-17 to check volatility of prices of essential commodities, in particular of pulses; (ii) created buffer stock of pulses through domestic procurement and imports; (iii) announced higher Minimum Support Prices so as to incentivise production; (iv) issued advisory to states/UTs to take strict action against hoarding and black marketing under the Essential Commodities Act 1955 and the Prevention of Black-marketing and Maintenance of Supplies of Essential Commodities Act, 1980.
CAD narrowed down to $22.2 billion (1.1 per cent of GDP) in 2015-16 as compared to $26.9 billion in 2014-15. CAD narrowed down to $0.3 billion (0.1 per cent of GDP) in 2016-17 (April-June) from $6.1 billion (1.2 per cent of GDP) in corresponding period of the previous year.
Foreign exchange reserves stood at $365.3 billion on November 25, 2016, showing an increase of $5.1 billion over the level of $360.2 billion at end-March 2016. Country’s foreign exchange reserves are at a comfortable position to buffer any external shocks. In the current fiscal 2016-17 (April-November), the average monthly exchange rate of rupee (RBI’s reference rate) was in the range of Rs 66-67 per US dollar (Rs 66.47 per US dollar in April 2016 and Rs 67.80 per US dollar in November 2016). (RKS)