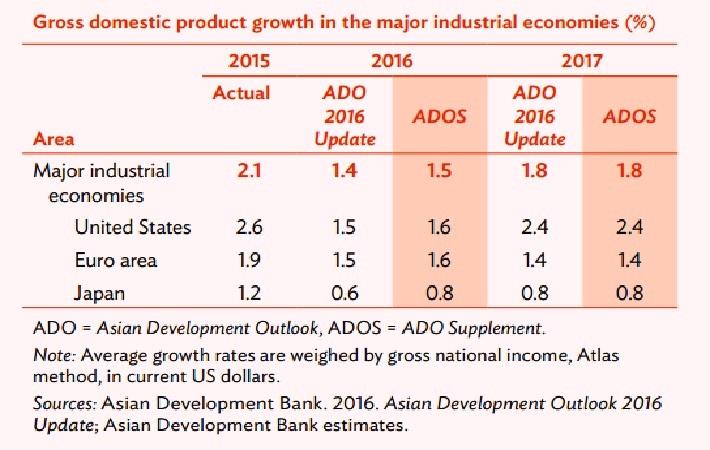 Indian economy is expected to grow at 7.8 per cent in 2017, the Asian Development Bank has projected. For South Asia too, the Manila based organisation expects growth to bounce back in 2017 to 7.3 per cent. In a supplement to its Asian Development Outlook 2016 Update report, ADB has retained its growth projection for developing Asia at 5.7 per cent.

Combined growth for the major industrial economies exceeded expectations in the Update, ticking up 0.1 percentage point to 1.5 per cent in 2016. Growth in 2017 is maintained at 1.8 per cent. Robust consumer spending supported the US economy, with supportive monetary policy and improved labour markets fuelling growth in the euro area. Japan’s expansion, meanwhile, will be buoyed by strong exports, despite the stronger local currency, the report said.

While downgrading its forecast for South Asia from 6.9 per cent to 6.6 per cent in 2016, the report adds that growth will bounce bank next year, reaching 7.3 per cent. On India, the report expects the effects of the transition to be short-lived, and projects the economy to grow at 7.8 per cent in 2017.

Growth in China—the world’s second largest economy—is expected to hit 6.6 per cent this year, driven by strong domestic consumption, solid wage growth, urban job creation, and public infrastructure investment. “The forecast for China in 2017 is maintained at 6.4 per cent,” the report states.