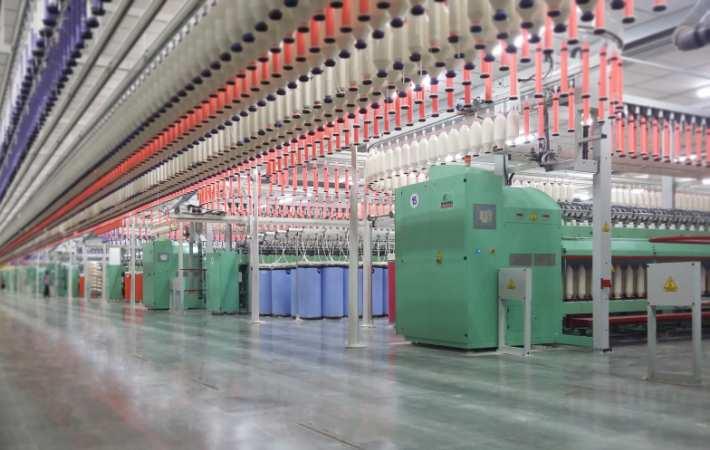 Marzoli FT6D roving frames in Sintex's Unit 2. Coutresy: Marzoli
A total of 48 Marzoli roving frames were erected in units I, II and III of Sintex textile division in the first two quarter of 2016, and these are today efficiently producing over 160 tons of world class roving per day. The installed machines, FT6D roving frame with automatic doffing is one of the most advanced roving frames available today in the market.

âEfficient and reliable roving frames are of the utmost importance for the overall efficiency and productivity of the spinning mill. So in Sintex the choice of the right roving frame supplier was taken with the maximum care. Marzoli's roving frame is known to be one of the best, if not the best, and most reliable machine available on the market,â states BB Sharma, CEO of Sintex textile division.

The special drive system of FT6D roving frame allows to reduce mechanical friction among components and vibrations, thereby entailing higher efficiency, substantial energy savings and high quality of the roving. All the motors are controlled by the central computer which guarantees the perfect coordination of all working organs: spindles, flyers, drafting system and bobbin rail; thereby entailing a precise bobbin formation, Marzoli said.

All technological parameters (twist, roving tension, bobbin build up, rail movement and flyers speed) can be inserted directly on the touch screen, entailing a great ease of use and outstanding flexibility. All the production recipes are stored and can be recalled saving time during lot changes. Automatic doffing is performed in less than three minutes, keeping downtime to a minimum. The creel is equipped with hexagonal rollers specifically designed to prevent sliver false drafts.

With Marzoli individual sensors the broken roving is immediately detected and does not need to be captured by the suction nozzles. Suction is therefore eliminated and the client can draw on a further energy saving of 4 Kwh. Furthermore the individual sensors, unlike the single photocell of traditional machines, do not stop the roving frame in case dust passes in front of them and guarantee an immediate stop in case of overlapping of the roving. These are just few of the features that make the FT6D a technologically-outstanding machine.

Sintex had launched a new project to increase its spinning capacity in March 2014. The project consisted in the establishment of three new spinning mills for a total of 300,000 spindles. 48 Marzoli FT6D roving frames have now been erected at these three spinning mills.

Sintex extended its project in January 2016 to include 9 units for a total of over 900,000 spindles to be installed in the next 3 years. For this extended project, Sintex textile division has ordered from Marzoli other 43 FT6D roving frames: 27 of 192 spindles for Unit 4 and 6 and 16 of 224 spindles for Unit 5. (RKS)