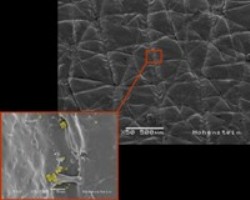 Antibacterial textiles, e.g. products treated with silver, have an odour eliminating effect and are therefore very popular particularly for so-called first layer or sports clothing which is worn directly against the skin.

In recent years, however, antim-icrobial functionalised textiles have repeatedly been the subject of critical reports in the media, creating unease among customers. A recent test of cycling trousers carried out by the German consumer advice magazine Öko-Test (4/2013) also gave lower ratings to tex-tiles containing silver.

Critics are propagating the idea that the antimicrobial effect could affect the healthy human skin flora if it is too ‘strong’. This supposedly becomes a problem especially when antibacterial fibres are used in clothing that is worn close to the skin, such as underwear or socks.

There is one aspect that is usually overlooked in this criticism, though: The effective bioavailability of the active silver substances in the product. Re-searchers from the Hohenstein Institute in Bönnigheim/Germany have already refuted the fears about commercial quality antibacterial products in an extensive scientific field study several years ago (AiF no. 15537 N).

A comparison between the influence of normal and antibacterial functionalised chemical fibres on the skin flora and the micro climate showed no significant differences. The research results prove that antibacterial agents in high-quality textile finishes are incorporated into the product to work in the microscopical range on the surface of the fibre, preventing the formation of odour on the product.

Most of the silver ions in garments worn against the skin are simply not bioavailable and can therefore not have any effect there. They can also not be increasingly released through sweating or washing. The researchers were able to give the basic all clear for the products examined. However, they also suggested studying the effects of these functionalised textiles on the skin flora in the context of consumer protection.

Not all products can be examined in field studies over weeks or months before introduction to the market and there was no quick test available so far.

The Hohenstein researchers have now tackled this problem. A new test system allows tex-tile manufacturers to have the effects of antibacterial finishes on the skin flora examined already during product development. The practicability and reliability of the results pro-duced by the test system have already been proven through examination and comparison of functional textiles with antibacterial finish.