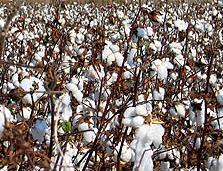 The production of cotton in Paraguay, which had began to recover slowly during the previous three seasons, has declined by about 50 percent during the current harvesting season, according to the Ministry of Agriculture and Livestock (MAG) and Cámara Algodonera del Paraguay (CADELPA or Paraguayan Cotton Chamber).
Compared to harvest of 82,000 tons of cotton in the previous season, cotton gins have so far received only about 40,000 tons of cotton, according to ABC Color report.
Analysts attribute the decline in cotton production to late availability of transgenic seeds, which arrived in late September 2012, about three months after the start of the sowing season.
Bad weather, fall in cotton prices, and non-payment of announced subsidy by the Government are cited as other reasons for the decline in cotton output this season.
In 2012-13, cotton was sown on an estimated 45,000 hectares of land, with 30,000 hectares been sowed with GM cotton and the remaining 15,000 hectares planted with domestic varieties of cotton.
Estimating the final cotton harvest at 43,000 tons, as the season is almost coming to an end, the national average cotton yield works out to 955 kg per hectare, which is below the last 25 years average of 1,035 kg per hectare.