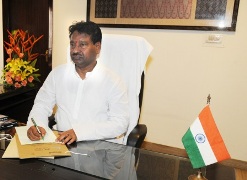 Mr. KS Rao/Ministry of Textiles/PIB
Mr. Kavuru Sambasiva Rao, a member of the Lok Sabha representing Eluru constituency in the Southern Indian state of Andhra Pradesh has taken charge as the new Textiles Minister in the Indian Government.
Speaking to reporters soon after assuming charge, the new Textiles Minister said the current account deficit (CAD) is an area of concern for the Indian economy, and the textile industry is one of the sectors where exports can be increased substantially.
“I am given to understand that our export in textiles is about US$ 34 billion today, which I wish to make at least US$ 50 billion by the year end,” the Minister said.
However, for the purpose, “We have to encourage skill development and speak to all the industrialists, in particular to find out what exactly are their problems, what type of support they require from the Government, and how they will be able to increase the exports,” Mr. Rao said.
Mr. Rao also assured that the Ministry will do “everything possible to provide employment in a big way to poor sections of the society, and increase the exports in a big way and do justice to the cotton growers as well as the handloom weavers.”
Terming skill development as paramount, Mr. Rao said, “When there are skills with the people of the country, the growth will go up, the production will go up, the cost of production will come down, and then we will be able to compete in the international market.”
On cotton prices, he said cotton farmers claim that they do not get fair price for their produce, and hence he would see how their output per acre can be increased.
He also said that farmers should be allowed to export their produce directly, without the involvement of middlemen and traders, whenever there is bumper crop.
The textile industry in India is the second largest employer, next only to the agricultural sector.
The US and the EU are India’s traditional export markets, which together import over 60 percent of India’s total textile and apparel exports.
However, in view of the weak demand in these markets, Indian textile exporters are making efforts to boost their exports to countries in Latin America and Africa, as well as Japan.

At a recent conference, as US retail executives observed the omicron...