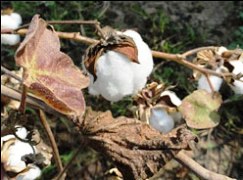 The North Indian state of Uttar Pradesh (UP) has requested the Genetic Engineering Approval Committee (GEAC) that falls under the Ministry of Environment and Forests (MoEF), to allow trial and commercial production of genetically modified Bt cotton in the state.
The agricultural department of Uttar Pradesh government has sent a letter to the Ministry seeking permission, and the approval is expected soon, The Indian Express reported.
According to the letter, the agricultural department will begin trial of Bt cotton in the state-owned farms in the agriculture universities of Uttar Pradesh, once it receives MoEF nod.
Once the approval is received, the state government is all set for trying out cultivation of Bt cotton, said C P Srivastava, joint director at the UP agriculture department.
If the trials show favourable results, there are plans to commercially produce, he added.
It has been 10 years since Bt cotton was introduced in India, and now, almost 90 percent of the cotton cultivated in India is Bt cotton. However, Uttar Pradesh has so far not experimented with growing Bt cotton.
It is now time for farmers in the state to avail the opportunity, said Raja Anand Singh, agriculture minister of Uttar Pradesh.