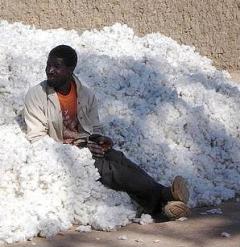 Early fixation of minimum procurement prices has boosted cotton sales in Zimbabwe this season.
According to Zimbabwean Agriculture Marketing Authority’s (AMA) statistics, around 41,907 tons of cotton has been traded so far since the start of the marketing season in April, herald.co.zw reported quoting Zimbabwe’s news agency New Ziana.
Last year, as the marketing season started late in July, following a disagreement between farmers and merchants over price, only 349,000 tons of cotton was traded during last season.
However, this year farmers as well as ginners have arrived at a consensus on minimum price of US$ 0.35 per kg for D Grade cotton to US$ 0.41 per kg for A Grade cotton.
Rockie Mutenha, Chief Executive AMA said buyers are licensed to procure cotton only from the areas that they have financed and from some particular common buying points. Meanwhile, as per Statutory Instrument 63 of 2011, cotton contracts are volume-based, and once the farmer honours his commitment, he is free to sell rest of his produce to companies offering best prices.
About 14 companies have registered for procuring raw cotton during the ongoing season, he added.
Despite positivity, Mr. Mutenha said it does not seem possible to meet last year’s production of 349,000 tons this year.
Instead of the US$ 1.50 per kg price fixed by the Government, ginners only paid a price of US$ 0.35 per kg to farmers last year, forcing many farmers to abandon cotton production this season, he said.
Secondly, mid-season drought during January and February this year have affected the crops, and would keep the production at low level, he explained.
Serving as a source of livelihood for more than 250,000 families, cotton is widely grown in Muzarabani in Mashonaland Central province, Chiredzi in Masvingo province and Chipinge in Manicaland province of Zimbabwe.