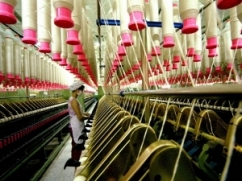 Results of recent study indicate that the sales value of textiles and clothing sectors was US $ 46.5 billion in 2012, which is 6.6 percent more compared to 2011.
The average growth in the real Gross Domestic Product (GDP) of the three sectors, textiles, retail and manufacturing was 2.9 percent from 2007 to 2012, which was above the average growth of the country and in contrast to the general industry sector, which declined during the period, reports Brazilian newspaper Valor Econômico.
The Gross Domestic Product (GDP) from textiles fell 3.4 percent between the years 2007 to 2012, whereas the segments of manufacturing and retail recorded real growth of 5.3 percent and 5 percent, respectively.
According to the report, the data is from the study conducted by the arm projects of Fundação Getúlio Vargas (FGV) at the request of the Brazilian Association of Textile Retail (ABVTEX) and the results of the study were presented to the Ministry of Development, Industry and Foreign Trade (MDIC).
The study indicated the total investments in textile, retail and manufacturing sectors together registered an average growth of 4.9 percent per year from 2007 to 2012, but the textile industry growth remained stable.
FGV states in the study that the low investment in the Brazilian textiles sector is due to the limited access of innovation in the sector.
Of the total amount for innovation in textile industry almost 77 percent is used in purchase of machinery and equipment, according to the report.
In May 2013, Brazil’s textile industry production fell by 4.5 percent year-on-year and 1.1 percent on a month-on-month basis.
In the clothing segment, the industrial output dipped 5.2 percent year-on-year and 4.9 percent month-on-month in May 2013.
The estimated expenditure of Brazilian families on textiles and clothing in 2012 was approximately US $102 billion, which represents 3.7 percent of total consumption expenditure on households.