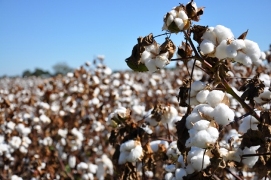 The Peruvian cotton only meets 40 percent of the requirements of Peru’s textile and garment chain, and the rest 60 percent is met by imported cotton, mainly US cotton.
Jose Ignacio Llosa, president of the Committee of Textiles of the National Society of Industries (SNI), said the Peruvian cotton production is limited by several structural problems that the Ministry of Agriculture and Irrigation (MINAGRI) is trying to resolve, but has failed so far, Peruvian news agency andina reported.
In this regard Mr. Llosa requested the Institute of National Defense of Competition and Intellectual Property Protection (INDECOPI) to prepare a careful analysis on the possibility of applying countervailing duties on the imports of cotton from the US.
The countervailing duties would raise the local spinners’ cotton price which would affect the entire textile and clothing chain.
INDECOPI investigation on the subsidies provided on Peruvian cotton by the US in 2012 was initiated by the demand of the local cotton farmers.
In a preliminary report, INDECOPI suggested that the subsidies granted by the Government of US on the cotton produced in the country are the reasons for the decline in the cultivation of cotton in Peru.
Mr. Llosa said the local industry believes there are other relevant factors also affecting the decline in the production. Small farms, low production per hectare, the abandonment of genetic development, lack of funding, and the informality present in the sector are among the factors contributing to low cotton production in Peru.
The low domestic cotton production drastically affects the Peruvian spinning industry and endangers the entire textile chain that employs 450,000 workers directly and 1.5 million workers indirectly, he added.