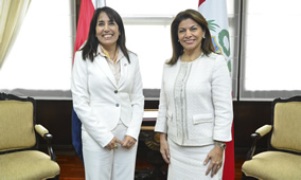 Ms. Silva (L) with President Laura Chinchilla (R)
Peru’s Minister of Foreign Trade and Tourism, Magali Silva Velarde-Alvarez, promoted the Free Trade Agreement (FTA) signed between Peru and Costa Rica, which became effective in June this year, during her visit to Costa Rica for inaugurating the Central ExpoPerú, being held from August 13-16 in Costa Rica and Panama.
Ms. Silva said that in 2012 Peruvian exports to Costa Rica totaled US$ 22 million, which is a small amount that can be easily increased in the coming years.
“The potential is very large and it is a task on which the Government and private entrepreneurs are focused,” she said, according to a statement from Peruvian Ministry of Foreign Trade and Tourism (MINCETUR).
Minister Silva met her Costa Rican counterpart Anabel Gonzalez and discussed trade promotion and investment relations between the two countries, in the light of the recent FTA.
“In addition to our bilateral relationship, Costa Rica welcomes and looks forward to having the support of Peru to integrate as a Member of the Pacific Alliance,” Ms. Gonzalez said.
Separately, Ms. Silva also met Costa Rican President Laura Chinchilla in order to strengthen bilateral relations and to exchange information to make the most of the coming into force of the FTA between Peru and Costa Rica.
“There is great interest of Peruvian businessmen in the Costa Rican market and vice versa, which will deepen relationships and make our business grow,” Minister Silva told the President.
The ExpoPeru Central America takes place in Costa Rica and then culminates in Panama on August 16. The event is a major trade promotion tool for Peru.
From 2002 to 2012, total trade between Costa Rica and Peru grew at an average annual rate of 13 percent and increased from US$ 19 million in 2002 to US$ 64.4 million in 2012, according to figures from Costa Rican Ministry of Foreign Trade (COMEX).