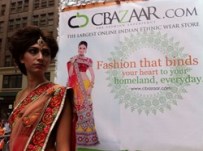 It was a first for Manhattan’s India Day Parade when Cbazaar, the largest online Indian ethnic wear store, presented a live Fashion Show on their float as it cruised down Madison Avenue in front of thousands of viewers on August 18th, 2013. Models were dressed in a sample collection of the Cbazaar’s 20,000+ designer clothes and accessories for women, men and children.

“We are honored to be a part of the largest India Day celebration outside of India,” says Rajesh Nahar, CEO of CBazaar. “Manhattan is the fashion capital of the world, and it’s only fitting that we hold a fashion show on the streets of this amazing city while celebrating India’s Independence.”

The Cbazaar float featured a “runway” built on the float for models to walk down. Lilly Rivera of BridalGal created the hair and makeup looks for the model while DJ Ripple provided the soundtrack for the fashion show. Models showcased clothes for both men and women including sarees, lehngas, sherwanis and anarkalis.

Parade onlookers along Madison were quick to start photographing the scene when they saw the beautiful fashion being showcased on the float. Viral Shah of New Jersey, a parade viewer, said, “Cbazaar’s float really stood out because of the models in the beautiful clothes. It was great to see Indian fashion being shown this way to all of Manhattan! I think it was the highlight of the parade…besides Vidya Balan, of course!" (The Grand Marshal)

With a collection of 20,000 ethnic and designer clothes and accessories for women, men and children, Cbazaar.com is the largest online Indian ethnic wear store. The company works with a team of 350 designers including collaborations with Manish Arora, Sonia Jeetley, Taika and more. This was Cbazaar's first time participating at India Day Parade. What better way to showcase their collection than with a fashion show live on the float!

Cbazaar is the largest online Indian ethnic wear Store. Cbazaar offers a myriad of Indian Ethnic Wear for men, Women and kids and has patronage in over 130 countries. It offers timeless Indian styles, as well as chic reinvented styles, in designer wear, party wear and everyday fashion. Cbazaar is a pioneer in Indian Ethnic Wear. The Collection includes over 20,000 exquisite designs.

Be it, Wedding Wear or Festive Apparels or trendy Daily Wear, Cbazaar is a one-stop-solution to get Indian Ethnic Wear and Accessories, online. We also house Designer Sarees, Salwar Kameez, Designer Kurtis, Lehenga-Cholis, Kids Clothing, Indian Ethnic Wear for Men, Designer Sherwanis, Kurta Pyjama, Pathani Suits and many more.  With a modest beginning, Cbazaar today is a pioneer in the Indian e-retailing industry.