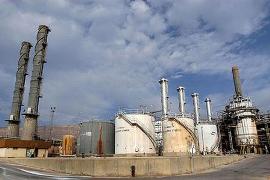 courtesy: Shana News Agency
The first phase of the largest petrochemical industry investment in the western part of Iran, the Ilam petrochemical complex, will be inaugurated this year.
The petrochemical project, initiated in 2005 with an investment of more than US$ 650 million, would start operations of its first phase within this year, reports Iranian news agency Shana.
The petrochemical complex has been built with the aim of producing strategic petrochemical products, including 460,000 tons of ethylene and 120,000 tons of propylene per year.
Iranian experts recently launched the 300,000 tons heavy polyethylene unit of the complex which is expected to become fully operational in near future.
Furthermore, all the utilities including power plant, water and steam generating units are complete and would begin operations gradually.
Javad Kamari, Managing Director of Ilam petrochemical plant, said the West Ethylene Pipeline has been linked to the petrochem complex through a 132 km offshoot, whose construction is almost complete and will provide the necessary feedstock for the heavy polyethylene unit of the complex.
Mr. Kamari added that the second phase of the petrochem complex with annual production capacity of 460,000 tons of ethylene will become operational within two years provided the financial needs for the plant are met on schedule.
Iran is the second biggest petrochemical producer in the Middle East, and contributes around one-fourth of the region’s petrochemical output.