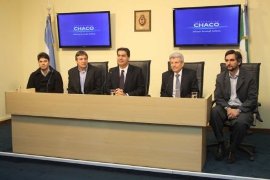 Mr. Capitanich (C) making announcement
The Governor of the northeastern Argentine province of Chaco, Jorge Capitanich, has announced the expansion of Brazil-based Santana Textiles Group for the manufacture of premium fabrics.
According to an official statement, the announcement was made by the Governor along with Juan Carlos Fabrega, President of the Banco de la Nacion Argentina (National Bank of Argentina) and Igor Perdigao, manager of Santana Textiles Group.
The project with an investment of US$ 45 million, will involve construction of a 16,000 sq m plant in the existing premises of the firm, over the next 12 to 15 months period.
The plant would manufacture premium fabrics and branded apparels which would be sold in Argentina, and is expected to create 300 direct jobs.
Governor Capitanich said the project requires a financial leverage for which the government along with the textile group is working with the National Bank through a syndicated loan from Nuevo Banco del Chaco (New Bank of Chao).
The Santana Textile group is a manufacturer of premium denim fabrics with four production units in Brazil and one in the Chaco province of Argentina.