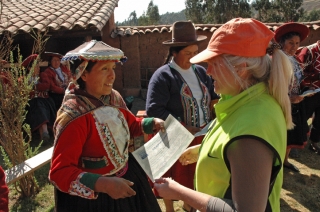 “These awards,” noted Kane, “act as a life-changing financial catalyst for the hundreds of textile artists who have participated over the years and they raise the self-esteem of these indigenous artists, whose rich culture went underappreciated for decades.”

In the meantime, the 9th annual festivities take place Sept. 3, 2013, in Chinchero, Peru. The awards program was established by Culture Xplorers in collaboration with Nilda Callañaupa, director of the Center for Traditional Textiles of Cusco, a store and museum. The participation of indigenous weavers has grown from five communities in year one to today’s nine communities with more than 600 weavers competing for pride and prizes.

Annually 30 winners share an annual prize pool that has grown to over $6,000. Callañaupa and the CTTC cooperative's leaders in each of the nine participating communities serve as judges. They also facilitate four wool dyeing workshops annually that bring together weavers who might otherwise be unable to access the naturally occurring substances for dyes that are derived in low altitudes.

Nilda Callañaupa is a National Geographic grantee, author and recognized leader in the decades-long effort to resuscitate the 2,000 year old Andean weaving tradition. From the Quechua-speaking community of Chinchero, she works to rally people into the competition. She often speaks at museums and universities worldwide on the Andean textile arts.

“The deep-rooted, long-term partnership between Culture Xplorers and the CTTC is an international model for how conscious travel companies can make a lasting and positive impact on local communities while fostering the rich living traditions that make each destination unique,” said Kane, adding that he believed this program is unique in South America. “We hope that by announcing the 2014 date now that people interested in culture, creative communities and textiles will plan to join the 10th anniversary.”

An ongoing challenge for a weaver is finding new inspiration for creating fine textiles. An overall goal of the weaving exhibitions is to encourage younger generations to take up weaving. An estimated 50 children show their weaving prowess as well in a children’s category.

Said Dr. Charles Stanish, Director, Cotsen Institute of Archaeology at the University of California Los Angeles, “In the last 20 years of my adult life I've seen the world globalize and homogenize to the point where you can go almost anywhere and see the same thing. We have these horribly similar cultures. So I think that one of the great responsibilities of people inour professions is to preserve and document the cultural diversity of the world."