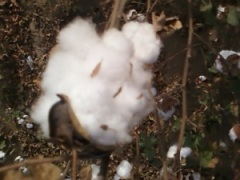 The Government of Ghana’s plan to allow commercial production of Bt (Bacillus thuringiensis) cotton in 2015 is over ambitious, according to Dr. Emmanuel Chamba, plant breeder and geneticist, Savannah Agricultural Research Institute of the Council for Scientific and Industrial Research (CSIR).
Although substantial production is being carried out, it will still be early to commercialize Bt cotton in the country by 2015, Ghana News Agency reported quoting Dr. Chamba.
The research being conducted by Ghana includes farmer confined field trials in six selected zones in the country’s three northern regions, Dr. Chamba said.
Cultural practices, including the application of fertilizers, concluded in early July this year, but plants are yet to get to reproductive stage, he added.
He explained that trial of Bt cotton has just started and one year data would be insufficient and inconclusive to opt for commercialization, as more research work and monitoring would be necessary.
Ghana’s northern neighbour Burkina Faso took to commercial cultivation of Bt cotton around five years ago, and the country’s cotton output has grown to 630,000 tons in the year ending January 2013.
Since the two countries have similar agro-ecological zones, the cultivation of Bt cotton is expected to similarly increase cotton output in Ghana.
On the African continent, in addition to Burkina Faso, Benin, Cote D’Ivoire, Mali, Senegal, South Africa, Tanzania and Zimbabwe have already started commercially growing Bt cotton, while Kenya is planning to introduce commercial production by 2015.