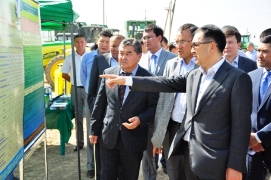 courtesy: minregion.gov.kz
The Government of the Central Asian country of Kazakhstan would be developing an action plan to diversify the acreage of cotton in the years 2014-2016, the Ministry of Regional Development of Kazakhstan has announced, according to a statement issued by the Ministry.
Yerbol Orynbayev, the Deputy Prime Minister and Bakytzhan Sagintayeva, the Minister of Regional Development, recently visited the Maktaaral district of South Kazakhstan to familiarize themselves with the production of various crops including cotton.
Mr. Sagintayeva said the region is faced with the problems associated with predominance of cotton monoculture, water shortage during the harvest period and deterioration of irrigated lands, and to solve these problems the Ministry would develop a detailed action plan to diversify the acreage of cotton for the years 2014-2016.
On behalf of the local administration of Maktaaral region, the Ministry of Regional Development along with other concerned ministries would be presenting the draft of the plan to the Government, he added.
Collection of raw cotton begun in the South Kazakhstan this month and as of now 40,000 tons of raw cotton has already been collected, and by the end of October 2013, farmers plan to harvest around 370,000 tons of cotton, according to Department of Agriculture of South Kazakhstan.
Cotton was sown on 140 million hectares in the region for the current harvest period which is 4 million hectares less compared to the area harvested in 2012.
In 2012 harvest period, around 257,000 tons of raw cotton was collected from the region.
South Kazakhstan is the only raw cotton growing region in the country, contributing around 40 percent of the region’s overall agricultural output.