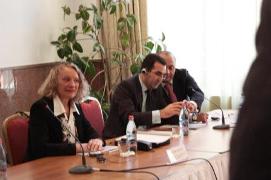 Mrs. Paglieri (L) & Mr. Harutyunyan (C)
Armenia, a mountainous country in the South Caucasus region of Eurasia, and Latin American country of Argentina have discussed setting up of a joint textile company in near future, ARKA News Agency reported.
Speaking to reporters, after the first Armenian-Argentinean Business Forum, organized by Armenian Development Agency (ADA) jointly with the Embassy of Argentina in Armenia, ADA director Robert Harutyunyan said both countries may jointly establish a textile company in the near future.
The Argentine delegation at the Business Forum comprised of representatives of 25 companies, including some textile firms, and was headed by Foreign Trade Secretary Mrs. Beatriz Paglieri.
The Business Forum was aimed at promotion of trade and economic relations between two countries and at providing an opportunity for Armenian businessmen to present their business proposals.
Mr. Harutyunyan said Armenian textiles are already exported to Argentina, but in very small quantities.
He added that the main objective of ADA is to explore new ways to export Armenian products to the Argentine market.
In 2012, Armenia’s total exports to Argentina were valued at US$ 7.5 million.
Argentina is one of the largest foreign investors in Armenia, and in invested US$ 76 million in the first half of this year, according to the National Statistical Service of Armenia.
Textiles sector was one of the 11 sectors identified by the Armenian Government in December 2011, as a part of its export-oriented industrial policy. Subsequently, in 2012, Italian lingerie brand La Perla invested in Armenia.
From January to July 2013, Armenia produced 1,409 million pairs of knitted garments and hosiery, showing a rise of 37.7 percent year-on-year.

The US has announced it will award up to $20 million in grants to...

Asia's emerging economies lag behind in recovering from pandemic pain

China's factory activity expanded in July at the slowest pace in 17...

CSI Engineers & Consultants Ltd in Bangladesh has completed the first ...