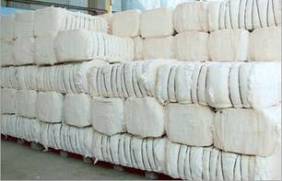 The production of raw cotton is estimated to be less than 100,000 tons during the recently concluded 2012-13 cotton season, which is a sharp fall of 84,000 tons compared to previous season’s production, Gabriel Papusseco, assistant director of the Mozambican Cotton Institute (IAM) has said.
Speaking at a training seminar in Namialo of Nampula province, Mr. Papusseco said the drop in cotton production was due to a combination of several factors, macauhub reported.
The price offered to farmers for their cotton produce was 10.5 meticals per kilo in the recently concluded season, compared to 15 meticals per kilo given in the previous season, which was a cause for less sowing of season, according to Mr. Pausseco.
Citing irregular rainfall as another reason, he said there was a lot of rain in January and February in large cotton growing areas, which made it difficult to clear the land and treat the plants against pests.
Further, the rain stopped in April and May, which severely affected the growth of crop.
Because of large amount of cotton production during the previous two seasons, companies found it difficult to sell all of their cotton, and such a situation caused de-motivation for some cotton growers, Mr. Pausseco said.
However, the estimated cotton production in 2013 is still higher than the long term estimates of growing 92,000 tons of cotton.
Cotton production in Mozambique grew from 41,000 tons in 2010 to 65,000 in 2011 and reached 184,000 tons last season.
The splendid rise in 2012 production, which pushed the region’s average yield to 900 kg per hectare, was due to favourable weather conditions and a large number of farmers undertaking cotton cultivation.