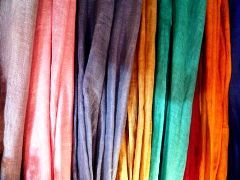 The exports of textiles, excluding apparel, from Turkey grew by 7.3 percent year-on-year to US$ 6.2 billion, during the first 9 months of the current year, according to the data released by Istanbul Textile and Apparel Exporters' Association (ITKIB).
The European Union (EU) is the main market for Turkey’s textile products, as 45 percent of the country’s total textile exports were destined to EU during the first nine months of 2013.
The textile exports accounted for nearly 5.5 percent of the country’s total exports during the period, according to the ITKIB data.
Country wise, Turkey exported textiles and raw materials worth US$ 809.32 million to Russia, US$ 623.72 million to Italy, US$ 318.58 million to Germany, and US$ 236.29 million to England, during the January to September period.
However, exports to Middle Eastern countries declined by 2.7 percent year-on-year during the period and amounted to US$ 476.11 million.
Sector wise, the country exported woven fabrics worth US$ 2.1 billion, yarn worth US$ 1.2 billion, knitted fabrics worth US$ 1.26 billion and fibers worth US$ 476 million, during January to September, 2013.
Of the overall textile exports from the country during January to September, 2013, textiles and raw materials from Istanbul accounted for US$ 2.9 billion, whereas the textile province of Bursa’s exports amounted to US$ 1.4 billion.
In 2012, Turkey's overall textile exports rose to US$ 7.75 billion from US$ 7.7 billion in 2011, according to statistics of the Ministry of Economy.