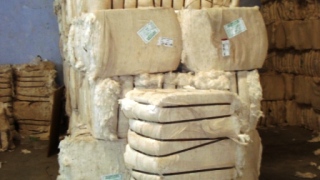 A Group of Ministers (GoM) has rejected the Indian Textiles Ministry’s proposal to impose a 10 percent duty on cotton exports beyond the declared surplus quantity.
India’s cotton production has been increasing every year, and in such a situation, the GoM recommended that there should be no restrictions on export of raw cotton and hence, there should not be any duty on export, Agriculture Minister Sharad Pawar, who headed the GoM, told reporters after the GoM meeting.
Mr. Pawar said the meeting advocated a free market for cotton, and it was of the opinion that any export duty or quantitative restriction on cotton exports would only penalize farmers.
Last month, the Textiles Ministry placed a proposal before the Cabinet Committee on Economic Affairs (CCEA) to impose a 10 percent ad valorem export duty at freight on board (FOB) or Rs. 10,000 per ton, whichever is less, for all cotton exports exceeding the “declared/revised exportable surplus”.
The proposal was aimed at putting in place a stable, transparent, production and tariff driven cotton market to balance the interests of stakeholders in the entire value-chain, according to the Ministry.
However, the CCEA deferred a decision on the proposal and referred it to the GoM, comprising of the Minister of Agriculture, Textiles Minster K Sambasiva Rao, Commerce Minister Anand Sharma and others.
The GoM has now advocated continuation of the current free-trade regime. At present, once the export contracts are registered with the Directorate General of Foreign Trade (DGFT), there is neither any restriction on the quantity of shipment of cotton, nor there is any export duty.
India is currently the second-largest producer and exporter of cotton. Over 70 percent of India’s cotton exports are destined to China.
Last marketing year which ended on September 30, 2013, India exported about 10 million bales (1 bale = 170 kg) of cotton, compared to 12.95 million bales exported during the previous marketing year.
The Textiles Ministry estimates India’s cotton production during the 2013-14 season to escalate to 37-37.5 million bales, compared to production of 34 million bales in 2012-13.