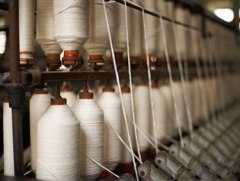 About 500 textile mills in Indonesia need revitalization in order to enhance their competitiveness in the domestic and export markets, Industry Minister MS Hidayat said on the sidelines of a national coordination meeting of Indonesian Chamber of Commerce and Industry (Kadin) in Surabaya, East Java, antara news agency reported.
The Minister said about 500 of the 1,500 textile and apparel factories in Indonesia are currently using machines that are 25 years old and are producing using outdated technology.
He said Indonesia is dependent on imports for textile machinery, which are mostly imported from China, a major competitor of Indonesian textiles in the domestic and global markets.
The textile and clothing sector is a major contributor to Indonesia’s non-oil export earnings, and hence the Government is seeking to invite opening of textile machinery factory in Indonesia, the Minister said.
The Indonesian Government would extend several benefits, including a 10-year tax holiday, to the company investing in textile machinery production in the country, Mr. Hidayat said.
Currently, the Government is studying the possibility of investment in textile machinery by Taiwanese and Japanese companies, the Minister added.
From January to August 2013, Indonesia exported textiles and apparel worth US$ 8.6 billion, according to the Indonesian Textile Association (API).
Compared to last year’s exports of US$ 12.46 billion, Indonesian textile and clothing exports are targeted to reach US$ 13 billion this year.