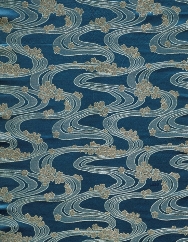 Nothing, no material, no technique is as capable of touching our sensual and mental existence so universally as textiles, particularly at a time that is in danger of becoming ever less sensuous due to increasing virtualization. Textiles with their abundance of weaves and textures that evolved over the millennia are the ideal medium to fulfill this need for sensuality.

The Kunstmuseum Wolfsburg again devotes itself to a central aspect of human life from the perspective of art in a historically far reaching, interdisciplinary multimedia exhibition that encompasses the most diverse cultures. After Interior/Exterior in 2008 and The Art of Deceleration in 2011, this exhibition represents a further step in the pursuit of modernism in the 21st century that the museum has been undertaking since 2006.

This large-scale exhibition encompasses approximately circa 200 works by 80 artists as well as 60 further anonymous artists whose names have not been preserved, among them major paintings by Gustav Klimt, Vincent van Gogh, Edgar Degas, Henri Matisse, Paul Klee and Jackson Pollock. But artifacts whose creators’ remain nameless can also be viewed in the circa 2700 square meters large exhibition space, for example a pre-Columbian textile fragment from the collection of Anni Albers.

Our exploration of the significance of the textiles also involves a kind of “re-reading” of the history of modern art from Art Nouveau to the present. The modern separation of applied and fine art resulted in the systematic, decades-long exclusion of all handicrafts from the art historical canon. In the process, modernism drew decisive impulses from the ties between art and craftsmanship.

Those expecting to primarily be confronted with textiles in this exhibition will be surprised. Visitors will not only encounter works of art made out of textiles, for example the typical knitted pictures by Rosemarie Trockel, but also paintings illustrating textiles like the hanging laundry in Edgar Degas’s “Woman Ironing” or the sumptuous Ball-Entrée that envelopes Marie Henneberg in a textile cloud in her portrait by Gustav Klimt (1901).

Videos deal with the notion of the textile (Kimsooja) or immerse the viewer in a cosmos of constantly shifting nets (Peter Kogler). Objects are furthermore on show that one otherwise encounters solely in ethnographical museums, for example fine African Kuba cloth.

Its comprehensive approach makes Art & Textiles a fundamental exhibition. The origins and complementary supplement can be found in counterpart, the 2001 Ornament and Abstraction exhibition (Fondation Beyeler) that examined the significance of the ornament for the development of abstract art.

The intellectual patron of that show was the Viennese art historian Alois Riegl whose universal history of form from 1893 led from humankind’s earliest patternsto the Egyptian lotus motif and the Greek palmette and from there to the arabesque ornament. The thesis of the exhibition was that they can be traced further in abstract art. In doing so, Riegl responded to Gottfried Semper, who in 1863 saw technology and the dealing with material as the origin of forms and symbols. “Form follows material”: This is the formula that can be applied to the Art & Textiles project.