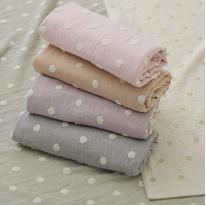 The enterprises operating in the light industry, majority of which are textile and apparel enterprises, of Uzbekistan produced goods worth 5,254.8 billion soms from January to September 2013, which is an increase of 15.3 percent year-on-year, as per the data released by the State Committee on Statistics of Uzbekistan.
According to a statement issued by State Committee on Statistics of Uzbekistan, the dynamic increase in the industrial production could be attributed to the implementation of measures by the Uzbek Government for supporting and encouraging the development of industrial production, competitiveness and expansion of the range of products in the light industry.
During the first 9 months of this year, the textile enterprises produced goods worth 4,326.0 billion soms indicating a rise of 13.6 percent compared to the same period last year, whereas the garment sector manufactured products worth 532.0 billion soms, showing an increase of 25.5 percent year-on-year.
According to the data, sub-sector wise the production of cotton fabric increased 1.4 percent, cotton yarn rose by 1.2 percent, knitted products surged 1.5 percent and production of jerseys increased 1.2 percent compared to the same period last year.
Production of hosiery swelled by 1.4 percent year-on-year, whereas production of raw silk yarn and textile haberdashery grew 1.5 percent and 4.3 percent year-on-year, respectively.
In January to September, the export of light industrial products, excluding cotton fiber, reached US$ 675.9 million, which is a rise of 35.6 percent compared to the same period last year.
Uzbekistan’s light industry is represented by Uzbekengilsanoat—the State Joint-Stock Company of Uzbekistan which covers over 280 enterprises operating in cotton yarn, fabrics, hosiery, sewing, knitwear and other sub-sectors. Almost half of these firms have been set up as joint ventures with foreign investors.