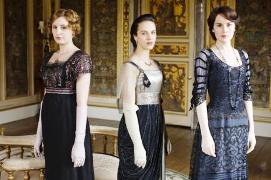 courtesy: winterthur.org
A visual delight for the fans of the award-winning British television series ‘Downton Abbey’ is well on its way as the famous Winterthur Museum in Delaware is set to host an exhibition highlighting the elaborate costumes from the period drama.
Slated to take place from March 1, 2014 to January 4, 2015, the event titled ‘Costumes of Downton Abbey’ will feature nearly 40 costumes and accessories worn by the characters, both upstairs and downstairs, in the program.
To be arranged chronologically, the exhibit will first open to an area featuring servants’ uniforms then gradually moving to a display of graceful tweeds, luxurious tea gowns and finally intricately detailed evening clothes.
Sourced from the world’s premiere film, television and theater costumier Cosprop, the to-be-featured pieces will include Lady Sybil’s harem pants, Lady Mary’s engagement dress and Lady Edith’s ornate wedding gown.
The visitors to the exhibit will also have a chance to step into and experience the world of Downton Abbey and the contrasting world of Winterthur founder Henry Francis du Pont and his contemporaries in the first half of the 20th century.
A co-production of Carnival Films and Masterpiece, ‘Downton Abbey’ depicts life in an aristocratic household of the fictional Earl and Countess of Grantham and is one of the most popular and critically acclaimed period dramas ever produced. It has won a Golden Globe Award for Best Miniseries and seven Emmys including a Primetime Emmy Award for Outstanding Miniseries. It was the most watched television series in both the UK and the U.S. and became the most successful British costume drama series since the 1981 television serial ‘Brideshead Revisited’. By the third series, it had become one of the most widely watched television shows in the world. The Guinness World Records recognized Downton Abbey as the most critically acclaimed English-language television series of 2011.