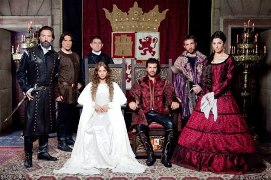 courtesy: Museo del Traje
Lavish period costumes from the highly popular Spanish historical fiction television series ‘Isabel’ have become the subject of an exhibition, currently going on at the Museo del Traje, Madrid.
Scheduled to run till December 8, 2013, the event showcases more than 30 costumes selected from the first two seasons of the show, produced by Diagonal TV for TVE.
Based on a thorough study of the historical documents related to the reign of Queen Isabella I of Castile, the featured pieces have been co-designed by the famous Look Art costume company directors Pepe Reyes and Natasha Gallardo.
Divided into six areas, the exhibits include costumes worn by the major characters of the hit series, including Isabel Castile, Ferdinand of Aragon, Henry IV, Alfonso Carrillo, Diego Pacheco, Gonzalo Chacon, Gonzalo Fernández de Córdoba and Hacén Muley Boabdil.
The first part ‘Castilla’ charts the journey of Queen Elizabeth, from her childhood to coronation, on a backdrop of dark and earthy colours. The segment also showcases the outfits donned by the character of Joan of Avis.
The second area ‘Boda y coronación’ (meaning marriage and coronation) highlights two of the most iconic dresses sported by the onscreen Elizabeth—one during her wedding to Fernando and other on her coronation as Queen of Castile.
The third part ‘La lucha por el poder en Castilla’ (which translates to ‘the struggle for power in Castille’), displays Diego Pacheco’s doublet, Alfonso Carrillo’s cassock and suits worn by the other two key characters Gonzalo Fernandez de Cordoba and Gonzalo Chacon.
The fourth segment ‘Reino de Granada’ (meaning Kingdom of Granada), includes richly embroidered bright coloured clothing, sported by the actors and actresses of the second season such as Muley Hacén, Aixa, Zoraida and Boabdil Zagal.
The final two sections of the exhibit feature accessories and props used in the programme.