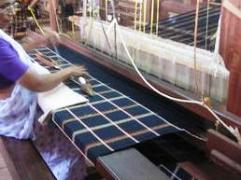 Jatiya Sangsad, the Parliament of Bangladesh has passed the ‘Bangladesh Handloom Board Bill, 2013’, aimed at development and expansion of the handloom industry in the country.
The proposed law, drafted in Bangla as per the higher court verdict, has a provision for holding the meeting of the Handloom Board once in every two months. It also allows the authorities to hold additional meetings if necessary, as per their need.
The Bill was moved in the House by Jute and Textiles Minister Abdul Latif Siddiqui, and was passed by voice vote as the opposition abstained.
The new law, once implemented, would replace the Bangladesh Handloom Board Ordinance, 1977, which was promulgated during the martial law period.
The 1977 Ordinance was later made more effective through a gazette notification for the Bangladesh Handloom Board (Amendment) Act, 1990.
The objective of the new Bill states that it has been drafted as the age old law was no longer appropriate to meet the present day necessity.
The handloom industry is the ancient, the biggest and the most important cottage industry of Bangladesh, but over the years the industry has been suffering due to several reasons, including skill deficiency, ineffective weavers’ associations, scarcity of working capital, and intense competition from mill and the powerloom sectors.