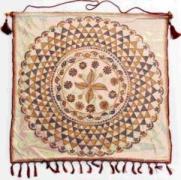 With the view of exploring the potential of expanding trade in Latin American countries particularly Chile, the Indian Export Promotion Council for Handicrafts (EPCH) recently organized the 4th edition of Buyer-Seller-Meet (BSM) in the capital city of Santiago, for development and promotion of Indian handicrafts.
According to a statement issued by the Indian Embassy in Santiago, the EPCH aims to target the market-oriented economy of Chile through the BSM meet which was organized with the objective of increasing handicraft exports from India to Latin American countries.
Nearly 28 Indian handicrafts producers and exporters participated at the BSM meet and showcased various products ranging from home textiles, bags, stoles, scarves, shawls and accessories.
According to the EPCH, the three-day buyer-seller meet is expected to generate business worth Rs. 100 million for Indian handicraft manufacturers.
As part of the BSM meet, a seminar titled ‘India—a Preferred Sourcing Destination for Handicrafts and Gifts’ was also organized by the EPCH, where presentations were made on the handicrafts sector of the country and the importance of sourcing from India for increasing profitability by the importers in Chile.
During April-September 2013, handicraft exports from India grew by about 11.27 percent to US$ 1.56 billion, against exports worth US$ 1.41 billion recorded during same period of last fiscal, due to increasing demand from both traditional as well as newly emerging markets.
Last year, India’s handicraft industry achieved its export target of US$ 3.3 billion, and the target for the current fiscal year has now been upwardly revised by the Textiles Ministry to US$ 4 billion.
The handicraft sector in India employs around one million people, with Moradabad, Saharanpur, Jaipur and Jodhpur being the major handicraft hubs in the country.