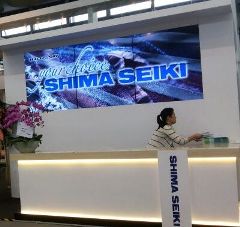 Leading Japanese flat knitting technologist SHIMA SEIKI will show its latest lineup in Shanghai this June at the ITMA Asia + CITME 2014 exhibition.
Through its exhibition theme “Breakthrough Technology” it will propose solutions for current needs of the knitting industries in China and Asia and beyond while emphasizing the importance of sustaining those industries for the future.
SHIMA SEIKI is confident in its ability to live up to such a challenging proposal, by presenting its ITMA ASIA + CITME 2014 exhibition lineup in 3 zones, catering to current needs (Breakthrough Zone), upgraded needs (WHOLEGARMENT Zone) and diversified needs (Expansion Zone). These will be met by distinctive technology that is unavailable elsewhere.
Breakthrough Zone
While the Breakthrough Zone caters to conventional shaped knitting, it nevertheless provides unprecedented proposals that break with flat knitting tradition. With its new workhorse SVR machine, SHIMA SEIKI proposes new applications in shaping and integral knitting through higher production efficiency and flexibility, resetting the industry benchmark once again in the tradition of its legendary SES and SSG machines.
Also on display are the specialty intarsia machine MACH2SIR with 40 intarsia carriers being the highest number of carriers currently available, and the coarse gauge SCG122SN featuring SHIMA SEIKI’s original SlideNeedle known for its wider range of knitting techniques, greater flexibility, higher efficiency and optimum loop formation and fabric quality.
Wholegarment Zone
Because of their capability to produce an entire garment without the need for sewing or linking, WHOLEGARMENT knitting machines realize quick response production with on-demand capability thanks to reduced lead times, and offer reduced dependence on labor as well as associated cost reductions. WHOLEGARMENT knitting is no longer proposed as a “future” manufacturing method for China, as its market is steadily becoming ripe for WHOLEGARMENT applications due to rising wages and a diminishing post-production workforce.
Add to that the rapid growth of the domestic fashion industry along with increased demand for more fashionable, higher quality items, and WHOLEGARMENT becomes a viable alternative to conventional knitting methods.
In other words, WHOLEGARMENT can now be considered an optional upgrade to current production. In that respect, the planning, design and virtual sampling capability of SHIMA SEIKI’s SDS-ONE APEX3 3D design system make it an essential partner to WHOLEGARMENT knitting.
More ITMA Asia + CITME News... More Textiles News - China...