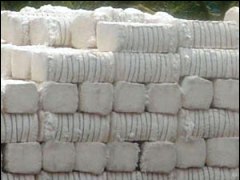 The quantity of cotton imported by China continued to decline and the country imported 2,084,400 tons of cotton in the first ten months of 2014, showing a sharp fall of 38.1 per cent year-on-year, according to customs statistics.
In October 2014, China imported 81,900 tons of cotton, down 41,000 tons or 33 percent from September 2014 imports, and down 42 percent compared to the same month of last year.
The average import price worked out to US$ 1,969 per ton in October 2014, down $76 per ton or 3.7 per cent from September, and a decline of 9.8 per cent from October last year.
During the first two months of the ongoing cotton season that began on September 1, 2014, China imported a total of 204,800 tons of cotton, registering a drop of 40.2 per cent year-on-year. In 2013-14 season, China imported 3.003 million tons of cotton, according to the data.
Meanwhile, the Government of China has announced subsidy of 2,000 yuan per ton of cotton to farmers in cotton producing areas outside Xinjiang in 2014-15 season.
The subsidy will be offered in nine provinces—Shandong, Hubei, Hunan, Hebei, Jiangsu, Anhui, Henan, Jiangxi and Gansu, China Cotton Association said.
Earlier this year, China replaced its temporary cotton purchase and storage policy with direct subsidy to famers. In Xinjiang, subsidy will be given to growers if the market price of cotton falls below 19,800 yuan per ton. (RKS)