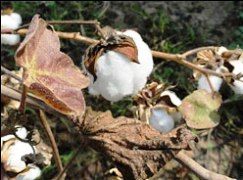 The four West African countries of Burkina Faso, Benin, Chad and Mali—together known as ‘Cotton-4’ or ‘C-4’—have called for an early conclusion to the negotiations to slash policies that distort markets.
Speaking in a meeting on development assistance in cotton at the World Trade Organisation (WTO) last month, the representatives of C-4 said that the recent fall in international cotton prices were hurting their farmers.
The C-4 said they appreciated development assistance they have received from various international donors, including South-South cooperation from Brazil, China and India, and they described the reforms they are undertaking together with their needs for further aid.
But, they also expressed concern about the falling cotton prices, which are forecast by the International Cotton Advisory Committee (ICAC) to remain at current low levels. The C-4 wondered how they can effectively compete in world markets when the ICAC also predicts that the yields of C-4 countries will remain static while those of other countries such as India—expected to become the world’s largest cotton producer—continue to rise.
At the WTO meeting, some other countries, including China, Argentina, India, Nigeria and Brazil, supported the C-4 stance for countries to avoid subsidizing cotton producers when prices fall, and for a quick conclusion of negotiations that aim to make steep cuts in domestic support, tariffs and export subsidies on cotton.
The meeting on development was the 22nd in a series of consultations held regularly since 2004, formally called the WTO “Director General’s Consultative Framework Mechanism on Cotton”. (RKS)