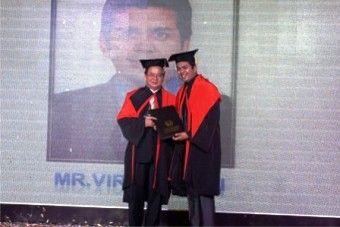 Mr. Viral Desai (R) receiving the degree
Textile Industrialist Viral Desai, director of Zenitex Pvt Ltd, a Surat, India-based textile process and dyeing company, has been conferred with Honorary Doctorate by the UK-based World Records University at a convocation held in Vietnam’s Ho Chi Minh City last month.
World Records University—the only university offering an Honorary Doctorate to record holders / breakers community—conferred the degree to five Indians at the ceremony, with Desai being the only businessmen from India to receive the honour. The Honorary Doctorate was presented to individuals whose efforts have had a significant impact on the wider organization, while also holding a National Record.
Desai was bestowed the Honorary Doctorate for winning the most number of awards on environmental protection and energy conservation. Earlier this year, Zenitex became the only textile company in India to have won the ‘National Energy Conservation’ award for the third time in a row.
Under the able leadership of Desai, Zenitex has adopted the ‘Green Energy’ principle, which has earned the company won Best Industry of Gujarat, in addition to the National Energy Conservation award from the Central Government for three consecutive years.
Desai’s perseverance and dedication towards fulfilling the Go-Green mission and sustainability initiatives has won him accolades from several quarters, and he also holds certification from the ‘Limca Book of Records’ for the same.
The Honorary Doctorate degree has been conferred  in the past to eminent Indian personalities, including Bollywood superstars like Amitabh Bachchan and Shahrukh Khan and business magnates like Mukesh Ambani and Ratan Tata for their quest for innovation and role in promoting art and culture and corporate responsibility in business.
Viral Desai has set a new benchmark by achieving the recognition as a businessman at the young age of 36. (RKS)