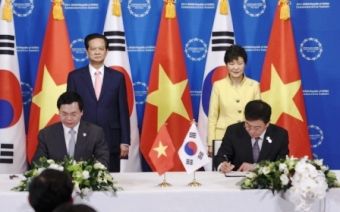 Korea-Vietnam FTA signing ceremony on Dec 10
The bilateral textile and apparel trade between Vietnam and South Korea is likely to get a boost once the recently concluded free trade agreement (FTA) between the two nations is implemented.
The FTA was concluded on December 10, 2014, after 2 years and four months since the negotiations began in August 2012. The FTA includes some of the items that were excluded from the earlier ASEAN-Korea FTA.
As per the FTA, Vietnam will remove import tariffs on 92.2 per cent of all products once the FTA is implemented, compared to 86.2 per cent of goods in the ASEAN-Korea FTA.
Vietnam has simplified its rules of origin and customs clearance, which will benefit textile and garments made in the inter-Korean Kaesong Industrial Complex. Korean companies specialising in cotton would benefit in price competitiveness vis-a-vis Japanese companies in Vietnam.
On the other hand, Vietnam-made garments such as men’s trousers and shirts, women’s suits, coats, jackets, blouses, and cotton yarn will get duty-free entry into the Korean market once the FTA takes effect.
For South Korea, Vietnam is the ninth-largest trading partner in the world, and second-largest among Asean nations. The volume of Korean exports to Vietnam increased three-fold from US$ 7.16 billion in 2009 to $21.8 billion in 2013, according to the Korean Ministry of Trade, Industry and Energy.
The latest FTA aims to increase the bilateral South Korea-Vietnam trade to $70 billion by 2020. (RKS)