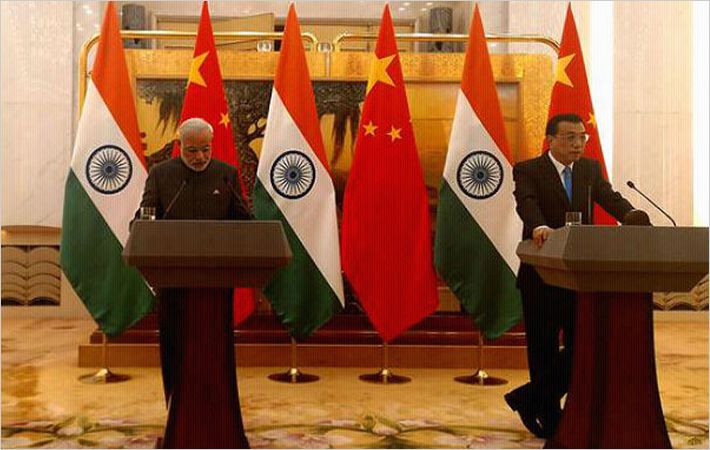 Narendra Modi (left) and Li Keqiang in Beijing/Courtesy: PIB
India and China have agreed to optimally exploit the present and potential complementarities in the textiles and other sectors, as identified in the Five Year Trade and Economic Development Plan signed in September 2014.
In a joint statement issued by the two countries during Indian Prime Minister Narendra Modi’s visit to China last week, the two sides took note of the increase in two-way trade and investment flows in the past few years, and acknowledged its positive contribution to strengthening their overall bilateral relationship and to supporting each other’s growth and development processes.
In this regard, both sides agreed to take “necessary measures to remove impediments to bilateral trade and investment, facilitate greater market access to each other’s economies, and support local governments of the two countries to strengthen trade and investment exchanges, with a view to optimally exploiting the present and potential complementarities in identified sectors in the Five Year Trade and Economic Development Plan signed in September 2014, including Indian pharmaceuticals, Indian IT services, tourism, textiles and agro-products.”
“The two sides resolved to work together to further strengthen their closer developmental partnership as it would provide impetus to economic growth and prosperity of the two countries as well as of their respective regions and the world at large,” read the joint statement.
The two sides also resolved to take joint measures to alleviate the skewed bilateral trade so as to realise its sustainability. On this, both sides will make full use of the India-China Joint Economic Group.
Further, leaders of both countries welcomed the decision to expedite discussion and endeavour to favourably address, in the spirit of mutual cooperation and reciprocity, the issues pertaining to tariff reduction in respect of relevant Indian products under the framework of Asia-Pacific Trade Agreement.
Modi and Chinese premier Li Keqiang welcomed the signing of the MoU to institute a dialogue mechanism between the NITI Aayog of India and the National Development Research Centre (NDRC) of the State Council of China.
They agreed that the Strategic Economic Dialogue is an important mechanism to explore new areas of bilateral economic cooperation. The next meeting of the Strategic Economic Dialogue, co-chaired by vice chairman of NITI Aayog of India and chairman of NDRC of China, will be held in India during the second half of 2015.
The leaders noted with appreciation the positive momentum in investment projects as Chinese companies respond to the invitation to ‘Make in India’ and Indian companies expand their presence in China.
The two sides expressed their readiness to enhance cooperation between the financial regulators and enterprises of the two countries in support of the building of the Closer Developmental Partnership. (RKS)

The UK and Japan today officially signed the Comprehensive Economic...

Design EPRs to back circularity in textile sector: EURATEX