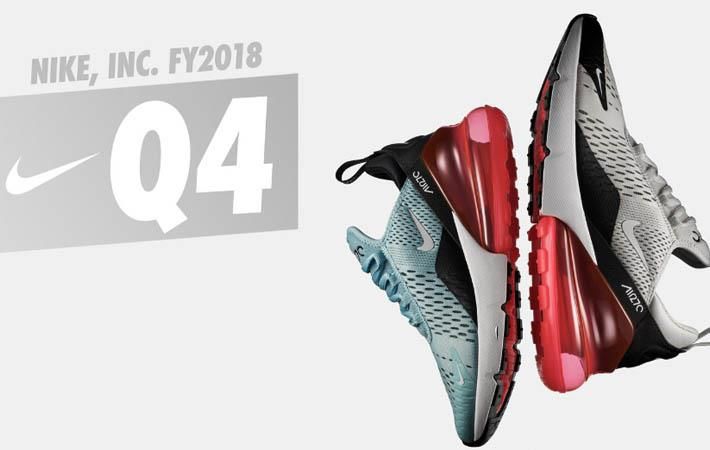 Courtesy: Nike
The fourth quarter revenue of the US headquartered Nike for fiscal 2018 has gone up13 per cent to a total of $9.8 billion driven by strong double-digit revenue growth in international markets and Nike Direct globally, and a return to growth in North America. Revenue for the Nike Brand for full year 2018 was posted at $34.5 billion, up 5 per cent.

Diluted earnings per share for the fourth quarter rose 15 per cent to $0.69, primarily due to strong revenue growth, gross margin expansion, a lower tax rate and a lower average share count, which were partially offset by higher selling and administrative expense. While for fiscal 2018, diluted earnings per share decreased 53 per cent to $1.17, which includes a decline in the weighted average diluted common shares outstanding.

In the fourth quarter, net income rose 13 per cent to $1.1 billion primarily due to strong global revenue growth, gross margin expansion and a lower tax rate, which were partially offset by higher selling and administrative expense, while diluted earnings per share increased 15 per cent to $0.69 reflecting a 2 percent decline in the weighted average diluted common shares outstanding. However, for full year, the net income decreased 54 per cent to $1.9 billion primarily related to the impact of the Tax Act, which offset strong revenue growth.

Selling and administrative expense soared 17 per cent in the fourth quarter to $3.1 billion. Demand creation expense was $983 million, up 25 per cent, primarily driven by sports marketing investments, new product launch and brand campaigns, and unfavourable changes in foreign currency exchange rates. Operating overhead expense increased 14 per cent to $2.1 billion, largely due to investments in global operations and capabilities to drive the Consumer Direct Offense, and, to a lesser extent, unfavorable changes in foreign currency exchange rates.

"Our new innovation is winning with consumers, driving significant momentum in our international geographies and a return to growth in North America," said Mark Parker, chairman, president and CEO, Nike, Inc. "Fueled by a complete digital transformation of our company end-to-end, this year set the foundation for Nike’s next wave of long-term, sustainable growth and profitability."

Cash and equivalents and short-term investments were $5.2 billion in 2018, $934 million lower than last year as share repurchases, dividends and investments in infrastructure more than offset net income and proceeds from employee exercises of stock options.