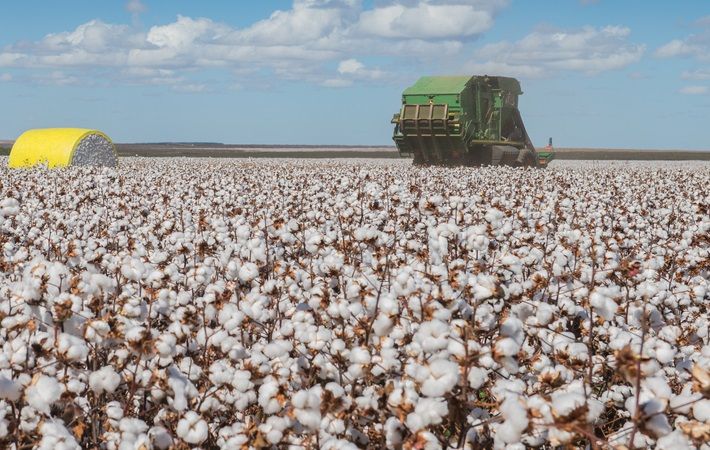 Pic: lourencolf / Shutterstock.com
The volume of cotton available in the spot market (majorly from Bahia) was low in July, resulting in a rise in prices during the month. Between June 30 and July 30, the CEPEA/ESALQ Index for cotton rose by 5.8 per cent, closing at 4.9617 BRL/pound on July 30. The average of the Index in July closed at 4.9850 BRL/pound, 2 per cent higher than that in June.

"Many agents were focused on the progress of both cotton harvesting and processing, majorly because they have already sold part of the output through term contracts. Thus, these agents were prioritising the accomplishment of these contracts late in the month. Besides, concerns about the quality and volume of the cotton from the 2020-21 season were slowing down sales even more," CEPEA said in its analysis.

Agents from some processing plants were, however, putting pressure on cotton values, since, according to CEPEA, besides the concerns about passing on cotton prices to the by-products, sales were lower than the expected. Other processors were working with the product stocked. As a result, some sellers had to lower asking prices in order to close deals.

"Despite the strong dollar and the high prices in the international market, sales in the Brazilian market continued attractive to sellers in July. Thus, domestic prices have been higher than the export parity since November 2020, leading some sellers to allocate their batches to the domestic market," the CEPEA analysis said.

In May 2021, the average of the CEPEA/ESALQ Index set a nominal record, closing at 5.1563 BRL/pound, 23 per cent up from the export parity. This scenario was linked to low cotton supply, due to the fast exports pace, the accomplishment of contracts to Brazilian processors, and because the cotton supply from the 2019-20 season was beginning to decrease, besides the forecast for a delay in the 2020-21 season.

Meanwhile, at least 31.7 per cent of the 2020-21 Brazilian crop may have been sold until July 27, compared to 68 per cent sold until the same date as an average of the last five seasons, according to data from the BBM (Brazilian Commodity Exchange) tabulated by CEPEA.

In Mato Grosso, 99.94 per cent of the output from the 2019-20 season and 78.02 per cent of that from next crop have been sold, according to data from Imea (Institute of Agricultural Economics from Mato Grosso) released on July 12. Sales of the product from the 2020-21 season have been slightly lower than that in the same period of the 2019-20 season (79.16 per cent), but higher than the average of the last five years, of 74.95 per cent.

According to data from Abrapa (Brazilian Cotton Producers Association), until July 22 this year, 24 per cent of the total cotton area in Brazil (2020-21 season) had been harvested. While 17 per cent of the area under cotton was harvested in Mato Grosso, the number one cotton producing state in Brazil, the figure was 37 per cent in Bahia.

The volume of cotton available in the spot market (majorly from Bahia) was low in July, resulting in a rise in prices during the month. Between June 30 and July 30, the CEPEA/ESALQ Index for cotton rose by 5.8 per cent, closing at 4.9617 BRL/pound on July 30. The average of the Index in July closed at 4.9850 BRL/pound, 2 per cent higher than that in June.
More Textiles News - Brazil...