Prices up at Australian wool auctions despite large volume 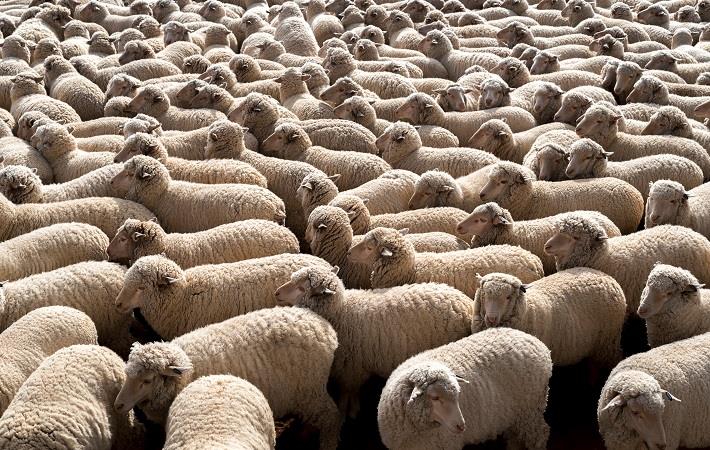 Pic: Shutterstock
Despite a large volume of 48,500 bales coming onto the market, the AWEX (Australian Wool Exchange) EMI (Eastern Market indicator) hauled itself over the 1500ac barrier to gain 11ac or 0.7 per cent to close this week at 1503ac clean/kg. The USD EMI appreciated by 1.4 per cent or 14usc to 1034usc clean/kg, completely eliminating the loss of last week's sales.
The larger gain on the USD EMI was registered as the Australian dollar (AUD) grew in value by 0.6 per cent against the USD. The week was perhaps the most impressive performing sale of the season thus far, according to the Australian Wool Innovation Ltd (AWI).
"Many factors appeared to be conspiring against the potential good fortune of the wool prices. Publicised larger volumes, adverse foreign exchange rates, the relative low quality of a large portion of the selection and the ever-present influences of the global economy were the main pre-sale concerns. However, what resulted was quite the opposite," AWI said in its report for sale week 24 of the current wool marketing season.
Most type sectors held ground strongly against the negativity and the largest segment of the market, the Merino fleece, gained upwards of 40ac dependent on the quality of the individual lot. Cardings were the sole category where prices drifted downward. To say buyer competition was strong would be understating the tone of the market as almost all operators showed some willingness, the AWI report said.
Merino fleece types gained 15 to 40ac, while some 20ac gains were made on the better skirtings, but anything slightly off was weaker by the close. Crossbreds were quoted a general 20ac higher, but within that some poorly prepared (or not prepared) clips were heading cheaper throughout as buyers punished those clips not classed to any sort of standard. Cardings were the only sector to face some depreciation and values dropped 20ac as a guide.
The passed in rate for the week was at a touch over 10 per cent with grower owners of Merino fleece still the largest user of this tool. Western Australian growers passed in over 20 per cent of their fleece whilst understandably the drought affected growing zones of NSW saw a rate half of that.
Export figures from the Australian Bureau of Statistics for the season to date as at the end of October 2019 show China remaining dominant buyer of the Australian wool at 75.8 per cent of the total clip. Italy is running second with 6.8 per cent of the country's wool export with India third with 5.5 per cent. The Czech Republic, South Korea and Egypt are next with 3.2 per cent, 2.1 per cent and 1.7 per cent respectively.
Next week has a sales roster showing 39,430 bales up for sale. It will be the last sale week prior to a three-week recess for the Christmas and New Year period.

Despite a large volume of 48,500 bales coming onto the market, the AWEX (Australian Wool Exchange) EMI (Eastern Market indicator) hauled itself over the 1500ac barrier to gain 11ac or 0.7 per cent to close this week at 1503ac clean/kg. The USD EMI appreciated by 1.4 per cent or 14usc to 1034usc clean/kg, completely eliminating the loss of last week's sales.
More Australian Wool Innovation Limited News... More Textiles News - Australia...